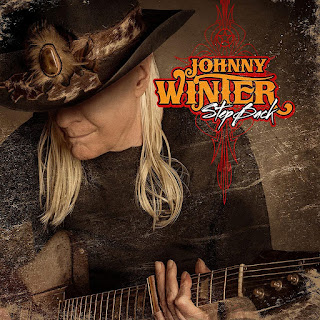 The death of blues guitarist Johnny Winter in July 2014 took us all by surprise. Sure, the man had been ailing for some time, but that didn’t stop him from touring non-stop and performing like a dervish for the audience each and every night. It seemed like he’d be with us forever, and while it’s sadly fitting that he should hang up his guitar for the last time while on the road, it did little to lessen the loss.

Before his death, Winter had all but finished up Step Back, his star-studded follow-up to 2011’s critically-acclaimed Roots set. Comprised of vintage blues and R&B songs that Winter grew up listening to as a teen in Texas, Step Back features covers of classics by artists as diverse as Ray Charles, Clarence “Gatemouth” Brown, Bobby “Blue” Bland, and Lightnin’ Hopkins, to name but a few. Winter was joined in the studio for his blues odyssey by such fellow fiends as Joe Bonamassa, Eric Clapton, Leslie West, Brian Setzer, and Dr. John, among other talents, the result being one of the best and most spirited albums of Winter’s lengthy career.


Winter departs from his signature sound somewhat with the album-opening “Unchain My Heart.” Winter’s cover of the Ray Charles classic probably skews closer to Joe Cocker’s later version than Charles’ original hit, but he does it up right. Accompanied by the “Blues Brothers Horns,” led by trombonist Tom “Bones” Malone and saxman “Blue” Lou Malone, Winter infuses the track with a big band, R&B vibe complete with angelic female backing vocals. Winter’s voice is surprisingly smooth here, taking on a silkier feel even while his guitarwork retains its razor edge. It’s a wonderful and atypical performance that proves that, even in the latest stages of his career, Winter could still hit us with a creative curve ball.

“Can’t Hold Out (Talk To Me Baby)” is a lesser-known Elmore James track, but a blues gem nonetheless, written by Willie Dixon and recorded in 1960 for Chess Records. Winter is accompanied Ben Harper on vocals and guitar, and much as he did working with Charlie Musselwhite on the pair’s award-winning Get Up! album, Harper’s contribution perfectly complements the older bluesman’s performance. Winter is provided a chance to display his slide-guitar prowess on the raucous track, but Harper lays in a few nice licks as well. Winter is joined by Eric Clapton on a laid-back cover of Bobby “Blue” Bland’s “Don’t Want No Woman” and, as usual, when “Slowhand” is recording with and challenged by another talented guitarist, he rises to the challenge. The two guitarist’s solos are things of beauty, drenched in the blues and polished off with a soulful shine while pianist Mike DiMeo layers in some tasty honky-tonk fills in the background.


Howlin’ Wolf’s “Killing Floor” is a tune familiar to anybody reading this, a blues standard that has been etched in wax by everybody from Jimi Hendrix and Electric Flag to Clapton and many others. Winter’s manager and rhythm guitarist Paul Nelson is featured here, acquitting himself nicely with a lively solo that keeps the song’s momentum going nicely. Winter’s vocals are playful and energetic, not as gruff as the Wolf’s but like fresh sandpaper nonetheless. Bo Diddly’s “Who Do You Love” is required reading for any young blues-rock band, and Winter and crew bite into it like a pride of hungry old lions on a gazelle. Meredith Dimenna’s backing vocals soften Winter’s raw tones somewhat, and his greasy slide-guitar licks are highlighted by Nelson’s accompanying acoustic and electric guitars; DiMeo’s spry piano-pounding adds a little livewire electricity to the performance.

ZZ Top’s Billy Gibbons guest stars on a Jimmy Reed’s “Where Can You Be,” his reckless six-string sound a perfect foil to Winter’s scorched tones. The mid-tempo number sizzles and sparks like a smoldering fire, and there’s not nearly as much difference in the two men’s solos as one might think; both are short, sweet, and strong and prove that while you can take the man out of Texas, you’ll never get the Texas out of the man. Joe Bonamassa stands alongside the Blues Brothers Horns for “Sweet Sixteen,” Winter proving with his opening solo that he can channel his inner B.B. King with the best of them. With DiMeo’s Hammond organ adding color, the two men put on an instrumental clinic certain to thrill any blues guitar fanatic. Winter’s vocals are soulful, the band keeps a steady, swaying rhythmic backdrop, and the horns add accent on what is a brilliant performance.


The heart and soul of Step Back, however, is Winter’s solo performance on Son House’s mournful “Death Letter.” Accompanied only by his National steel guitar and his weary voice, Winter’s intricate guitarplay is matched by the urgency of his gritty, haunted vocals. It’s a powerful performance, and one that shows how deep the blues ran through Winter’s DNA. His cover of Little Walter’s jaunty “My Babe” is much livelier by contrast. With the band laying down a traditional Chicago blues rhythm, Winter’s vocals are matched by harpist Jason Ricci’s dancing notes. Winter’s fluid guitar solo approximates Walter’s original harmonica solos, and sounds great next to Ricci’s underrated harpwork.

As a band, Aerosmith has always worn its blues fascination on its collective sleeves, and whatever one may think of them, there’s no denying that Joe Perry is a first class stringbender – a status proven by his appearance here. Dueting on Lightnin’ Hopkins' signature tune “Mojo Hand,” the band lays down a rollicking beat on top of which Winter and Perry slap out a pair of rattletrap solos that buzz and hum with unbridled blues electricity. Step Back closes out with a fine cover of Fat Domino’s finest, “Blue Monday,” Winter joined by Dr. John, who brings a bit of New Orleans flavor to the performance, his upbeat piano playing nicely off the Blues Brothers Horns and their nuanced R&B fills.


Johnny Winter fans are a rabid, loyal bunch, so the Reverend’s definitely preaching to the choir; the faithful already have a copy of Step Back tucked away on their shelf. As for the rest of you, if you’ve been sitting on the fence about Mr. Winter, this is the album to tip you over to the right side. Hearing Winter hold his own with some of the best and brightest from the blues and rock worlds is impressive enough, but with Step Back the guitarist makes the argument that even if an individual man’s life is frail and finite, the blues ring eternal.

Kudos to producer Paul Nelson for capturing these fine performances on tape; to the guest musicians who brought their best to the studio; to Winter’s talented band for their spirited and supportive playing; and most of all to Mr. John Dawson Winter III, who plays guitar and sings on his final album with the same love and affection for the music that he brought to his first recording. A one of a kind talent and a charismatic performer, Winter’s death is a huge loss for the blues…but as swansongs go, you won’t find better than Winter’s Step Back. (Megaforce Records, released September 2, 2014)

Buy the CD from Amazon.com: Johnny Winter’s Step Back