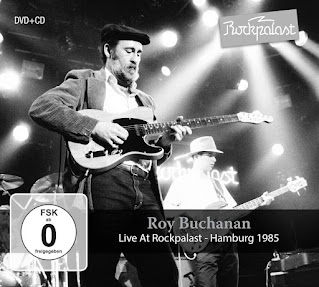 Roy Buchanan is probably the best guitarist that you’ve never heard. Although he found a modicum of success with the twelve albums he released during his lifetime, two of them achieving Gold® sales status (a heady accomplishment in the 1970s), his influence reaches far beyond the meager commercial returns of his work. The “Master of the Telecaster” provided inspiration for fellow guitarists like Jeff Beck, Gary Moore, Danny Gatton, and ZZ Top’s Billy Gibbons, among others with his heady brew of blues, roots-rock, R&B, and country music.

After an amazing string of eight studio and a single live album recorded and released during the brief space of nine years, by 1981 Buchanan was burned out. The vagaries of the recording industry, and his labels’ attempts to conform his talents to a saleable commodity had left him disgruntled and disillusioned. The guitarist would virtually disappear for a spell, taking a four-year hiatus to re-think and re-charge his batteries. Lucky for us, Alligator Records’ Bruce Iglauer convinced Buchanan to return from his self-imposed exile, giving the guitarist artistic control in the studio that would result in some of the best recordings of Buchanan’s career.


Live At Rockpalast is taken from a February 1985 performance by the guitarist and his band for the popular German TV show Rockpalast, and would mark Buchanan’s return to music…and what a return it would prove to be! Buchanan’s performance here, prior to the recording of his Alligator debut When A Guitar Plays the Blues, shows an artist and musician back in fighting form and shaking off the ring rust. Leading a band that included (seldom used) singer Martin Stephenson, keyboardist John Steel, and bassist Anthony Dumm – all members of U.K. pop/rock band the Daintees – as well as drummer Martin Yula, Buchanan cranks through a baker’s dozen of original blues-flavored roots-rockers and favorite covers, much to the delight of the enthusiastic German audience.

The set kicks off with the spry “Thing In G (Short Fuse),” a funky instrumental romp that sounds not unlike some of the material Stevie Ray Vaughan would be vamping on a couple of short years later. While the band provides a supple rhythm, Buchanan embroiders the song with his red-hot fretwork, the guitarist firing on all cylinders as he throws in sly blues, jazz, and rockabilly references throughout the four-minute firecracker. Buchanan’s subsequent take on Booker T & the M.G.s’ classic “Green Onion” is unlike any you’ve ever heard…while the band offers up a standard take on the song’s keyboard riffing and swaggering drumbeats, the guitarist stomps all over tradition with his wild-ass flamethrower solos, which bounce off the arrangement like a madman careening off the walls of his rubber room. It makes for an energetic and unpredictable performance, and a heck of a lot of fun.


Buchanan was well-known and revered for his ability to fuse blues, rock, and country music into an earthy, organic sound, and nowhere did he ever do it better than with “Roy’s Blues (Roy’s Bluz).” An intricate instrumental backdrop frames the almost whispered, briefly spoken lyrics as Buchanan’s fretwork ranges from low-key blues and roots-rock to jagged shards of angular jazz licks and twangy, barbed-wire country tones. It’s not blues as we know it, but it’s breathtaking nevertheless, the song stretched out to ten minutes by Buchanan and band so that by the time he hits the crescendo almost six minutes in, when the raucous vocals fly out of nowhere, you’re left exhausted.

By contrast, Buchanan’s instrumental “Blues In D” is a more traditional blues shuffle, with the guitarist showing his mojo hand through a number of passages throughout the song. Above a standard Chicago blues bass/drums rhythm, Buchanan tacks on an incendiary display of six-string pyrotechnics, emotion pouring from his fingertips in a performance that is pure instinct and adrenalin. He takes much the same tack with songwriter Don Gibson’s “Sweet Dreams,” Buchanan’s mournful, tear-jerking solos echoing the song’s heartbreak lyrics, adding a bit of blues hue to this instrumental take on a beloved country classic.


Like just about every other guitarist that came of age during the 1960s, Buchanan was touched by the incredible sounds that issued from the instrument of the late Jimi Hendrix. Buchanan’s take on Hendrix’s “Hey Joe” – the song a garage-rock standard first hit big by the Leaves in 1965 and later adapted by Hendrix as the Experience’s first single – skews more towards Hendrix’s vision in this performance. Although Stevenson’s vocals are unremarkable, it’s Buchanan’s mangling of his instrument that draws your attention, his solos incorporating scraps of blues, rock, and some otherworldly sounds that even Jimi couldn’t reach. The following version of Hendrix’s “Foxy Lady” soars even further into the stratosphere, the vocals overshadowed and hidden beneath Buchanan’s unbelievable, high-flying guitar and the muscular rhythmic soundtrack provided by Dumm and Yula.

Buchanan’s “Messiah (Messiah Will Come Again)” is provided a truly ethereal performance here, the song’s unlikely fusion of blues and rock with classical music overtones unique to Buchanan’s particular experience and perspective. His haunting guitarplay here is elegantly beautiful and tragically dark, the guitarist wringing every bit of energy and emotion from his fretboard. The mood is heightened greatly, however, by the upbeat “Night Train,” a rockabilly-tinged instrumental with a ramshackle framework that rocks and rolls like the wheels on a freight train. Buchanan closes Live At Rockpalast with “Wayfaring Pilgrim,” another haunting instrumental that showcases his immense abilities, great tone, and masterful blending of musical styles.


The 1985 release of the acclaimed When A Guitar Plays the Blues represented the beginning of a fertile period of Roy Buchanan’s career, the guitarist quickly recording 1986’s Dancing On the Edge and the following year’s Hot Wires before his tragic death in 1988. Returning to the trenches after a four-year break, Buchanan sounds recharged, revved-up, and ready-to-roll on Live At Rockpalast. There are few live documents of this unique and influential guitarist available, and this one is well worth your hard-earned coin. (MIG Music, released March 6, 2012)

Buy the CD from Amazon.com: Roy Buchanan’s Live At Rockpalast