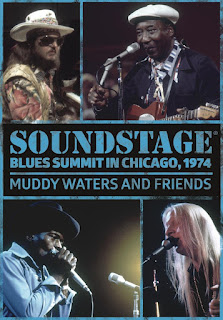 In July 1974, Muddy Waters was chosen to host the inaugural episode of Soundstage, the beloved live concert series broadcast by PBS stations around the country for thirteen subsequent seasons. Waters was the first in a long run of talented performers to appear on the acclaimed TV show, and he brought some friends with him, resulting in what the producers called a “Blues Summit In Chicago.” The King of Chicago Blues brought along his Queen, the phenomenal Koko Taylor, and a full suite of acolytes and admirers, including Junior Wells, Michael Bloomfield, Johnny Winter, Buddy Miles, and Dr. John, among others.

After a solid performance of Waters’ “Blow Wind Blow” that’s interrupted by introductions, the show gets down to business with a sizzling take on “Long Distance Call.” Muddy is in fine voice, belting out the lyrics with perfect timing and emotion, accompanied by Wells’ icy harp and Bloomfield’s twangy guitar licks, with Pinetop Perkins banging the piano keys. Singer/songwriter Nick Gravenites joins Wells on his signature “Messin’ With the Kid,” the pair ripping the roof off the sucker with an energetic performance, Bloomfield’s wiry solos underlining a smiling Wells’ lively vocals.

Waters returns to the stage for a raucous read on his “Mannish Boy,” the band delivering a white-hot groove for Waters to croon above while Winter and Bloomfield swap licks. Taylor is joined by Willie Dixon for a romp through “Wang Dang Doodle,” guitarist Phil Guy receiving a well-deserved spotlight while Koko outshines her male colleagues with an electrifying performance. With his usual modesty, Johnny Winter introduces “Walking Through the Park,” leading the band on a livewire cover of the Buddy Guy tune featuring three dueling guitarists and Wells’ raging harp play.

An extended take on Waters’ “Got My Mojo Workin’” literally has the audience on its feet as everybody hits the stage. Wells offers a freight-train solo, Winter lays down a finger-blistering lead, and Pinetop hammers the keys alongside Dr. John. There are other solid performances here, ten in all for this first Soundstage release, the DVD a definite “must have” for any old-school Chicago blues fan! (Legacy Recordings, 2015)