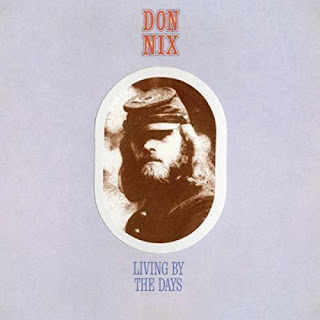 Singer, songwriter, musician, and producer Don Nix is one of the most overlooked heroes of the blues, if only for his support of the great Furry Lewis, which provided the elderly blues legend a second chapter to his lengthy career. Nix wrote one of the classic standards of the blues in “Goin’ Down,” the song recorded by artists like Freddie King and Stevie Ray Vaughan, among many others; he was also a high school classmate of Steve Cropper and Donald “Duck” Dunn in Memphis and a session player for the legendary Stax Records label. Nix is one of the integral figures in blues, soul, R&B, and Southern rock music and his meager catalog as a solo artist is dominated by a handful of obscure 1970s-era albums that have sadly been long out-of-print.

Nix’s Living By the Days, was the first of two releases by the artist on the respected Elektra Records label, which at the time was flush from cash from successful albums by the Doors and the Paul Butterfield Blues Band, among others. This 1971 album was largely recorded at the Muscle Shoals Sound Studio with a little help from friends like guitarists Wayne Perkins and Jimmy Johnson, bassists “Duck” Dunn and David Hood, drummer Roger Hawkins, and keyboardists Barry Beckett and Chris Stainton, who was on loan from the Grease Band, best known for their association with Joe Cocker. Musically, Living By the Days is a homemade quilt carefully sewn together with bits and pieces of blues, blues-rock, gospel, and the sort of Memphis soul that Nix helped define during the late 1960s.

Don Nix’s Living By the Days

Opening with a haunting keyboard intro that fades into the sound of falling rain, Nix’s “The Shape I’m In” is a classic Southern tale about the search for redemption. The song’s protagonist is suffering a crisis of faith, lost, wondering where he’s going, a situation that Nix describes quite poetically with memorable imagery. His somber vocals are backed by the gospel-styled harmonies of Claudia Lennear, Kathi McDonald, Don Preston, and Joey Cooper, the soundtrack a sparse roots-rock ramble of guitar and rhythm. It’s an effective construct, and a perfect introduction to the artist’s unique blend of blues, rock, country, and gospel music.

By contrast, “Olena” is a more upbeat, up-tempo rocker that displays tinges of Memphis soul and gospel beneath its rollicking, keyboard-dominated soundtrack. Whether it’s Perkins or Jimmy Johnson that delivers the short, succinct, and spot-on guitar solo, it’s Barry Beckett’s rolling honky-tonk 88s that drive the song’s rhythms, backing harmonies chiming in behind Nix’s almost-lost vocals that drawl out a story of the rambling man and the woman that’s waiting for him at home. Blues great Furry Lewis adds a bit of narration before the gang jumps into a joyous cover of Hank Williams’ “I Saw the Light.” Nix’s twangy vocals are joined by the Mt. Zion Choir (Jeanie Greene, Marlin Green, and Wayne Perkins), there’s a bit of chicken-pickin’ going on, and the jangly percussion supports the upbeat, church revival spirit of the performance.

Going Back To Iuka

The album’s title track is a grand mid-tempo Southern rocker that’s heavy on lyricism and offers but a hint of blues underpinning. Amidst a swell of epic instrumentation, Nix’s heartworn, world-weary protagonist speaks of unrequited love, the object of his affections looking for more than he can offer – “rainbows that never appear” – and while she’s dreaming of hundreds of years, he’s merely “living by the days.” It’s a powerful song, a great performance, and while the 1970s-era literary aspirations are a bit dated, there’s a timelessness to the emotional lay of the lyrics. “Going Back To Iuka” rides a similar train but on a different track, its minimalist lyrics paired with a rockin’, ramshackle soundtrack, guitars rising above the fray of crashing drumbeats and chaotic instrumentation.

The spry “Mary Louise” is the square peg on Living By the Days, an odd little morality tale, the title character a young woman leaving home for the bright lights of L.A. The carefully-spun lyrics are told from a third-person perspective…a jealous boyfriend, a possible suitor...while musically a mesmerizing recurring riff is joined in the gumbo pot with heavy percussive brush work and flashes of twangy piano-play. The album ends with “My Train’s Done Come And Gone,” a bit of brilliant roots-rock reminiscent of the Band that features Nix’s wistful, almost melancholy vocals wrapped around a set of insightful lyrics, the accompanying music a perfect blend of Southern rock, blues, and gospel, the song perfectly capturing the overwhelming wanderlust of the era.

It’s hard to believe that Elektra thought that Living By the Days would launch Nix into the commercial stratosphere then occupied by Leon Russell and Delaney & Bonnie. Although it’s a fine album, a classic of sorts, Nix’s creative but eclectic musical hybrid lacked the marketing hook provided by Russell’s exposure from the Mad Dogs & Englishmen album and film or D&B’s friends like Duane Allman and Eric Clapton. Still, Living By the Days is a showcase for the artist’s Americana aspirations, the album one of those lost gems of an era when music – if not the industry itself – was truly colorblind in its influences and artistic expression. (Real Gone Music, releases April 2, 2013)