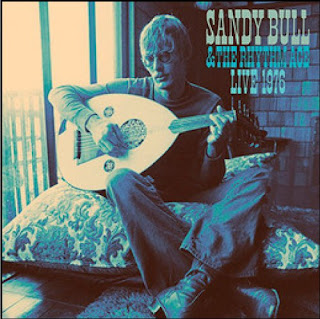 One of a legion of young soul rebels who emerged during the early 1960s with guitar in hand, Sandy Bull was in the same league as fellow travelers like John Fahey, Leo Kottke, and Britain’s Bert Jansch. Unlike those aforementioned contemporaries, however, who pulled the majority of their inspiration from blues and folk music, often with a smattering of jazz, Bull’s restless musical spirit would lead him to incorporate elements of classical, Indian, and droning Arabic raga style into his playing.

Also unlike his fellow string-benders, Bull largely eschewed the traditional three-to-four-minute pop song format in favor of extended instrumental jams that would allow him to stretch out like an improvisational jazzman and get to the heart of the performance, providing his breathtakingly intricate compositions with greater texture and tone. Bull would also pick up a bass guitar, banjo, and oud once in a while, his proficiency in these various instruments lending a dangerously-exotic vibe to his compositions.

Signing with the noted folk label Vanguard Records, Bull released a handful of albums circa 1963-72, the most acclaimed of these, his 1963 debut Fantasias for Guitar and Banjo, recorded with jazz percussionist Billy Higgins (who had played with Ornette Coleman, John Coltrane, and Herbie Hancock, among others). Featuring the twenty-minute, side-long “Blend,” the album featured Bull’s myriad of influences and introduced him as a serious, talented musician. But by the time of the release of 1972’s Demolition Derby, Bull had sunk deeply into drug addiction, and he seemingly disappeared from music altogether until resurfacing in 1988 with the acclaimed Jukebox School of Music album.


The truth is, Sandy Bull hadn’t turned his back on music during the 1970s, and after going through rehab, he relocated to San Francisco and began performing again, including the May 1976 appearance opening for Leo Kottke at the Berkeley Community Center that is captured by Live 1976. Remastered from a long-lost tape made by friend and engineer Hillel Resner, Drag City’s vinyl-only release of Live 1976 shines a light on Bull’s enormous talents with a set of performances and soft-spoken intros that paint a fuller portrait of this unfairly obscure instrumentalist.

Accompanied by “The Rhythm Ace,” his electronic drum machine, and a four-track TASCAM recorder on which he would often place backing bass and drums to accompany his live lead instrument, Bull displayed the technological acumen of a prog-rock virtuoso while unfolding his largely acoustic-based, dream-like compositions. Live 1976 opens with “Oud,” a seven-minute-plus instrumental performed with the pear-shaped Middle Eastern stringed instrument that Bull had come to favor. The performance is simply magical, mesmerizing in its depth and tone as Bull explores several varying musical landscapes within the confines of the song.

A brief interlude follows where he jokingly introduces “the band” and demonstrates the abilities of “The Rhythm Ace,” a still-unfamiliar bit of technology in the mid-1970s. With “Love Is Forever,” Bull tries his hand at a more-traditional, albeit elongated pop song, his imperfect but aching vocals accompanied by elegant acoustic fretwork, the drum machine, and syncopated riffing on an electric oud. Inspired by the Drifters, Bull introduces “Driftin’“ as a “beach tune,” a pre-recorded bass line providing support beneath Bull’s spry, soulful guitarplay that weds an odd folk-rock sound to a lofty R&B framework, with a little weepy country steel twang laid in on top as an exciting counterpoint.


Bull’s humorous introduction to “Alligator Wrestler” explains the childhood interlude with the song’s protagonist and veers off course into a story from his rehab before tying it all together with a nice bit of metaphor. The song itself is an energetic, upbeat instrumental that evinces a swamp-rock vibe, adding a loping, funky rhythmic track with heavy bass and some of the oddest, Southern-styled chicken-pickin’ that you’ll ever hear. Running nearly nine-minutes, the performance is exhausting and awe-inspiring, and is the beating creative heart of Live 1976.

The album ends with “New York City,” the performance falling just shy of eight minutes and displaying a more urbane, sophisticated edge to Bull’s playing than previous tracks. The guitarist’s nimble licks are paired with a jazzy, syncopated rhythm resulting in an inspired piece that easily places Bull alongside such vaunted contemporaries as Larry Coryell and Al Di Meola as a skilled jazz-fusion stylist.

While continuing to perform, often outside of the public’s eye, throughout the 1980s, Bull would eventually land in the rural countryside near Nashville, building a home and studio and raising a family. He would return to the recording world with the aforementioned Jukebox School of Music, followed by 1991’s Vehicle, and 1996’s Steel Tears, both albums released on his own independent Timeless Recording Society label, all three treated with deference by critics.


Although passing away in 2001 at the too-young age of 60 from cancer, Sandy Bull left behind a body of work that, while not large by contemporary recording standards, nevertheless represents the best qualities of his playing – creative, efficient, meticulous, imaginative, and adventuresome. Live 1976 is a welcome addition to this catalog that serves to bolster Bull’s growing reputation, the album a warm and entertaining collection that reveals another dimension of this underrated instrumentalist’s enormous talents. (Drag City Records, released February 8, 2012)