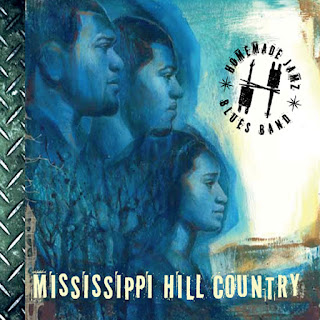 Mississippi Hill Country, the fourth Homemade Jamz Blues Band album, was financed by the band’s fans through a Kickstarter fundraiser (the Reverend among those who donated). From all indications, the money was well-spent, as the production preserves the raw spirit of the band’s performances but never sounds cheap or underserved. The biggest difference between Mississippi Hill Country and the band’s third album, 2010’s self-produced The Game, is in the growth shown by the Perry siblings as artists, frontman Ryan Perry in particular.


It is Ryan’s songwriting on Mississippi Hill Country that stands out; six years into an acclaimed career, the oldest Perry sibling is still only 22 years old. But it sounds like he’s been listening (heavily) to his father’s record collection, Mississippi Hill Country displaying a wide range of styles and influences, from 1960s era blues-rock and ‘70s soul to the 1990s sounds of R.L. Burnside and Junior Kimbrough. Throughout it all, the band evinces a strong identity, the material relying more on subtlety and talent than on the novelty that often plagued their youthful performances. Ryan, Kyle, and Taya have grown up, and they sound better for it.

The album-opening “Buy One Get One Free” is a blustery blues-rocker reminiscent of Michael Bloomfield and Electric Flag while “Times Are Changing” offers a timeless romantic plea that matches Ryan’s soulful vocals with a throwback vibe that reminds of Curtis Mayfield. The hypnotic “Red Eye Flight” is the sort of menacing juke-joint jam that the Burnside family built its legend on, full of circular guitar riffs, heavy throbbing bass lines, and steady rhythmic percussion, a spirit also shown by the title track, a full-tilt tribute to those Hill Country legends that captures the essence of this hardscrabble region.


Mississippi Hill Country closes with a bit of magic, the acoustic “Love Doctor” catching lightning in a bottle as Ryan calls on the influence of Delta greats like Charley Patton and Son House to bang out a haunting, powerful bit of old fashioned black cat moan. I tell ya, the blues seldom gets better than this… (self-produced, released 2012)