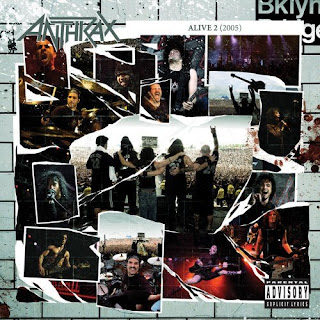 Anthrax reunited, with major league shouter Joey Belladonna at the helm and the twin six-string attack dogs of Scott Ian and Daniel Spitz at his back – what more do you need to know? Drummer Charlie Benante is still in the chair, pounding the hell out of the kit and barb-wire bassist Frank Bello has been brought back into the fold, effectively recreating one of the hardest-hitting and most lethal stage gangs in the annals of heavy metal.

Alive 2 (2005) captures the band’s reunion performance from June 2005 at the Starland Ballroom in Sayreville, New Jersey. Roaring through a set of classic, earth-scorching Anthrax tunes like “Caught In A Mosh,” “Among the Living,” “Antisocial,” and fan favorite “I Am the Law” (from the Judge Dread movie), the band sounds as raw, jagged and dangerous as they did 20 years ago. Ian is a phenomenal string-shredder, but when playing off Spitz’s manic leads, the two throw down the gauntlet for younger bands to try and follow.

Belladonna’s classical NWOBM vocals separate him from the typical ‘80s-era hardcore honker, bringing a grand dignity to the affair as he rages from a low growl to a high-flying shriek within the space of a heartbeat. Bello and Benante are, quite simply, one of the best rhythm sections in metal, providing a solid, if explosive, backbone to the material. Taken altogether, the band has lost few steps through the years, Anthrax still quite capable of peeling the plaster from your walls and leaving your eardrums in tatters.

Alive 2 (2005) is that rarity, a live album from a veteran band that doesn’t sound as if it was performed in automatic pilot. The members of Anthrax are clearly having fun with this reunion, and it shows in the grooves, Alive 2 (2005) benefiting from the band’s uncompromising heavy metal stance and remarkable talent for raising hell and creating chaos on stage. (Sanctuary Records, 2005)