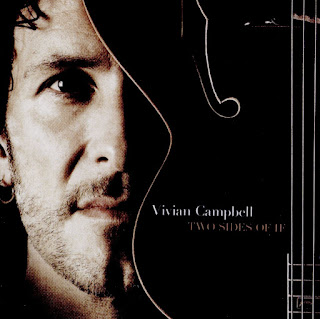 Following in the footsteps of Gary Moore and other hard rock heroes, Vivian Campbell rediscovers the magic of the blues with his solo debut, Two Sides of If. Although his credentials as a guitarist are second-to-none – Campbell punched the clock with both Ronnie James Dio and David Coverdale’s Whitesnake before joining Def Leppard for that band’s drive to the top of the charts – the Irish axeman hasn’t, shall we say, shown much propensity towards the blues in the past. Blooze-rock fans need not worry, however, because Campbell shows a casual mastery of both the form and the spirit of the blues on Two Sides of If.

Vivian Campbell’s Two Sides of If


Putting together a top-notch band that includes multi-talented drummer Terry Bozzio and harp player Michael Fell, Campbell proceeds to step in front of the microphone and knock out a set of smoky, fiery blues standards and modern blues-rock covers that sidesteps any questions of authenticity. Campbell is a world-class guitarist and quite up to the task of reimaging these songs to showcase his skills. Def Leppard fans expecting metallic shredding may be sorely disappointed, Campbell choosing instead to display a range and tone he never needed to pull out of the toolkit with his previous bands.

The guitarist’s vocals are especially surprising, Campbell proving quite adept at conveying the subtlety and passion of the blues, his understated approach bringing a tacit emotion to the material. He’s not Coverdale or Dio, but he ain’t ‘alf bad either, you know... Two Sides of If includes red-hot covers of classic Willie Dixon and Robert Johnson (naturally) tunes, most notably Dixon’s “I Ain’t Superstitious,” redone as a riff-driven punch-up that would do Kim Simmonds proud, and “Come On In My Kitchen,” Johnson’s country blues spiced up with just the right amount of humility and scorching guitar licks. Campbell tries his hand at some timeless soul, as well, hitting up Booker T’s Stax hit “The Hunter” and Lowell Fulson’s “Reconsider Baby” while also paying homage to Fleetwood Mac and Z.Z. Top with well-chosen covers.


The highlight of Two Sides of If, though, may well be Campbell’s respectful reading of fellow countryman Rory Gallagher’s “Calling Card.” Performed with Van Morrison cool and jazzy undertones, the song frames perfectly both Gallagher’s songwriting skills and Campbell’s impressive six-string technique. It’s just one fine moment among many on a solid debut from Vivian Campbell, and one well worth checking out for any fan of old-school British blooze-rock. (Sanctuary Records, released 2005)

Buy the CD from Amazon: Vivian Campbell’s Two Sides of If