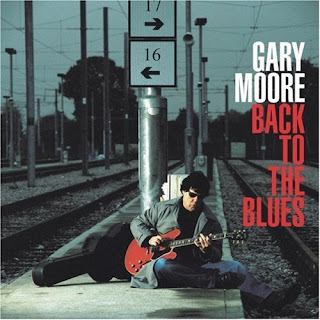 Guitarist Gary Moore has been around the block a time or two, honing his axe on highly-amped rock ‘n’ roll boogie (the original Skid Row), jazz-rock fusion (Colosseum II), and hard rock (Thin Lizzy). His solo career, which has stretched out for better than a quarter-century, has encompassed all these styles and more, Moore capable of playing everything from the heaviest of metal to progressive rock. The blues, though...the blues are where Moore seems most at home, and although he’s visited the genre more than once during his lengthy career, he’s never embraced it as he has with Back To the Blues.

Gary Moore’s Back To The Blues


Moore’s blues pedigree is an honest one. Mentored by Fleetwood Mac founder Peter Green as a teen, Moore has held his own with great guitarists like Green and Albert King. As such, he’s no stranger to the sound he’s created on Back To the Blues. Mixing original songs with blues standards, Moore delivers a solid collection, his masterful six-string work sometimes roaring, sometimes weeping, but always evoking the blues. The album-opening “Enough of the Blues” is a bone-cruncher with snarling vocals and red hot riffs. Tackling Albert King’s “You Upset Me Baby,” Moore tailors it to his purposes with a brassy Chicago blues arrangement complete with tasty horns.

Moore revisits T-Bone Walker’s “Stormy Monday” in high style, and the Yardbirds’ gem “I Ain’t Got You” is afforded a lush arrangement with fluid guitar work that echoes the original. A Moore original, “Pictures of the Moon” is an atmospheric tune, heavy on ambiance and spacey six-string work that reminds me of Robin Trower. “The Prophet” is a wonderful instrumental track, Moore expressing the collective history of the blues in a six-minute display of musical virtuosity. The album-closing “Drowning In Tears” features heavy, syncopated rhythms, Moore’s mournful vocals, and some tasteful, minimalist guitar shuffling that is all the more powerful for its sparseness.


If you’re looking for some blues to heat up your turntable, forget that weak Eric Clapton stuff that you’ll find on display at your local record store – “Slowhand” fell asleep years ago in my humble opinion. Seek out Gary Moore’s Back To the Blues instead and experience a heartfelt performance from a maestro still inspired by the blues muse. (Sanctuary Records, released 2001)

Buy the CD from Amazon: Gary Moore’s Back To the Blues