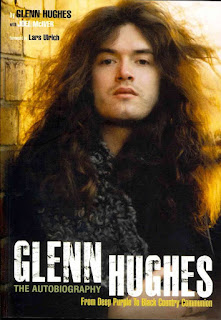 Glenn Hughes is a contradiction – the talented singer, songwriter, and musician remains a relatively obscure figure in America, in spite of his status as a bona fide rock ‘n’ roll legend. Although you may not have heard of Hughes, or maybe remember his name only vaguely, chances are that if you’re a fan of ye olde “classic rock,” you’ve probably heard the “voice of rock” upon a time.

Hughes’ tenure with bands such as Trapeze, Deep Purple, and Black Sabbath during the 1970s and ‘80s has long been the stuff of myth, while collaborations with like-minded musicians like Sabbath’s Tony Iommi, singer Joe Lynn Turner, and guitarist Pat Thrall have only added to his legacy. Throw in a moderately successful solo career (especially in Europe) that has yielded almost two-dozen recordings, and add Hughes’ role as an integral part of the classic rock supergroup Black Country Communion, and the question becomes not “who is Glenn Hughes” but, rather, “why haven’t you heard of Glenn Hughes?”

With better than 40 years of rock ‘n’ roll history behind him, Hughes has some stories to tell, and tell them he does in Glenn Hughes: The Autobiography. Unlike similar celebrity rock bios that either shovel mud on somebody else (Keith, I’m thinking of you) or mindlessly revel in behavioral excesses (ahem, Mutley Crew…), the punches that Hughes throws are almost exclusively thrown at himself. Glenn has been a bad boy through the years, and the decades of soul-seeking and struggling with addiction he reveals in these pages aren’t shared as thinly-veiled boasts but rather as cautionary tales.

Although Hughes’ longtime struggle with cocaine is certainly no secret to many in the industry, the extent to which it threatened to derail his career is shocking in its extremity. That Hughes managed to come out the other side of decades of abuse with his musical gifts and sense of humor intact is not only amazing, but downright encouraging. Aside from the obvious sincerity that shines from the pages of Glenn Hughes: The Autobiography, Hughes’ conversational style and the way he frames his story conveys a friendliness and down-to-earth personality that the average reader can relate with. Personally, I’ve spoken with Hughes on occasion, and have always been struck at the ease in which he engages you…it’s like meeting an old friend on the street and coming away thinking “what a hell of a guy!”

As for the dirt in Glenn Hughes: The Autobiography, there’s little of it, really, although Hughes comes embarrassingly clean on a number of high-profile sexual and romantic liaisons, and offers the truth, from his perspective, of a number of high and low points throughout his storied career, most of the self-professed lows involving drugs of one sort or another. The bio begins with a brief overview of his childhood and teen years, and touches upon his early musical efforts. Hughes’ first band of note, the vastly-underrated Trapeze, is covered to some extent, leading up to the unexpected break that would launch his career into the stratosphere – his recruitment as a member of Deep Purple.

Joining Deep Purple in 1973 was a huge advance for the young singer and bass player’s career. Purple was already one of a handful of jet-setting, globe-spanning superstar rock bands at the time, and Purple’s choice to bring in Hughes and vocalist David Coverdale to replace Ian Gilliam and Roger Glover had the band’s longtime fans wondering. Hughes contributed bass and vocals to three of the band’s mid-to-late 1970s studio albums, and a handful of live discs, and he goes into detail on his time with the band, his relationships with both old members like Jon Lord and Ian Paice as well as newcomers like Coverdale and, later, Tommy Bolin. For a Purple fan, Hughes’ memories of his time with the band – positive and negative – provide priceless inside info.

After the break-up of Deep Purple, Hughes would be involved with a number of various projects, some more successful, creatively and/or commercially, than others. There would be a short-lived Trapeze reunion, a pair of well-regarded albums made with former Pat Travers guitarist Pat Thrall (Hughes/Thrall); an unsatisfying collaboration with blues-rock guitarist Gary Moore; and a number of projects with Tony Iommi, some better than others, that would culminate in the ill-conceived Iommi solo work cum Black Sabbath album-in-name-only Seventh Star. Some of these projects Hughes touches upon only fleetingly, others he offers more detail, but often they are just presented as an interesting aspect of the overall narrative flow.

Also only briefly addressed is Hughes’ seemingly secret career as a studio gun for hire. Although Hughes’ career is indelibly marked by high-profile band memberships and musical collaborations, he has also often lent his talents to a lengthy list of other artists’ recordings. Among Hughes’ session credits are those one would expect – guest appearances on albums by Purple alumni like Roger Glover, Jon Lord, and Tommy Bolin – the not entirely unexpected, such as singing with Pat Travers or Ken Hensley (Uriah Heep), and the surprisingly diverse, including sessions with the KLF, Motley Crue, Ryo Okumoto, and Quiet Riot, among many others. One gets the sense that Hughes brought his unique voice to many of these sessions not for monetary gain (although there probably was some) but rather because of the immense joy he has in the music.

Given short-shrift by Glenn Hughes: The Autobiography is the artist’s lengthy and, at times, brilliant solo career, which began in 1977 has since resulted in a number of solid albums of Hughes’ trademark funk-infused rock ‘n’ soul music. Although Hughes touches upon a few of the milestones of his solo work, including his 1977 debut Play Me Out, he concentrates mostly on his post-sobriety recordings of the 21st century, which include such gems as 2003’s Songs In the Key of Rock, 2005’s Soul Mover, and 2006’s Music For the Divine.

A little more insight is provided Hughes’ role in the formation of Black Country Communion with blues-rock guitarist Joe Bonamassa, drummer Jason Bonham, and keyboardist Derek Sherinian. Hughes has seemingly found a new creative spark playing alongside these three talented musicians, and the overwhelming European acceptance of the band’s blues, rock, and soul hybrid sound has added another interesting chapter to Hughes’ still-ongoing story. Two studio albums and a live CD and DVD into the career of a band that’s only a couple of years old, only stateside dominance as eluded Black Country Communion so far.

Glenn Hughes: The Autobiography is constructed as a sort of oral history, with Hughes’ recollections punctuated by commentary from family (including his wife and parents), friends like Rob Halford (Judas Priest) and Tom Morello, and former bandmates like Coverdale, Thrall, and Iommi. Woven throughout Hughes’ tales of famous musicians and various girlfriends, however, is that of his struggle in the face of overwhelming addiction, including the self-deceit, the rationalized relapses, and the final moment of clarity where Hughes heard the voice of God (not literally, tho’ maybe…I’m not revealing any spoilers!) that led to his current sobriety and obvious joy of life.


Overall, Glenn Hughes: The Autobiography tells an amazing and engaging story – that of the rock star brought down to earth and subsequently resurrected to enjoy a second (third?) chapter of his career. One aspect of the book seemingly overlooked by others who have reviewed it is the perspective of the various people who have offered their comments on Hughes. Without exception, they all seem genuinely relieved that Hughes has found peace with himself, their comments displaying a fondness for the man and an appreciation of his talents…for Glenn Hughes is living proof that a nice guy can finish first… (Jawbone Press, published November 1st, 2011)

Buy the book from Amazon: Glenn Hughes: The Autobiography