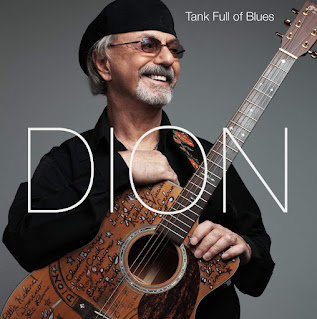 Over the course of a career that has spanned an amazing seven decades, Dion DiMucci has worked his way across a full spectrum of American musical styles. From the pop, rock, R&B, and doo-wop of his 1950s-era hits to the folk-and-gospel leanings of his ‘60s commercial comeback – as well as the soulful electric-blues that he’s explored during the new millennium – Dion has done it all and done it well.


Spurred on by conversations with music journalist Dave Marsh, who stated that Dion is the only first-generation rocker of the 1950s who remains artistically relevant today, and with his wife Susan daring him to live up to Marsh’s claim, DiMucci dove headfirst into a creative frenzy that resulted in Tank Full of Blues. The last leg of a blues-n-roots trilogy that began with 2005’s Grammy® Award-winning Bronx In Blue and continued through 2007’s Son of Skip James, Dion’s Tank Full of Blues is a stunning musical statement delivered by an artist who has lived and breathed the blues for decades.

Unlike those aforementioned albums, the former of which was a collection of classic blues covers, the latter mixing a handful of originals amidst sturdy old warhorses, Tank Full of Blues offers up a slate of mostly original material, the result of a divinely-inspired songwriting jag that provided Dion with a wealth of material. The title track is a vintage-sounding throwback to the 1950s with a Chicago blues lilt and finely-crafted fretwork, while “I Read It (In the Rolling Stone)” evinces a swamp-blues menace with appropriately dark-hued guitar paired with topical lyrics.

Dion’s “Ride’s Blues” is his tribute to Delta blues legend Robert Johnson, the lyrics weaving an enchanting tale while the sparse, atmospheric, guitar-driven soundtrack adds steel-coiled muscle above a steady pounding drumbeat. The “Two Train” medley welds Muddy Waters’ “Still A Fool” with Johnson’s “Ramblin’ On My Mind,” evoking a spirit of wanderlust with a wonderful, nuanced performance. The stream-of-consciousness “Bronx Poem” is a talking-blues tone-poem with elegant fretwork and insightful, autobiographical lyrics.


Throughout Tank Full of Blues, Dion’s powerful vocals are matched by his fierce, unbridled guitarplay and an uncanny songwriting sense. Those who dismiss Dion as yesterday’s news display their own ignorance, as Tank Full of Blues is one of the most soulful blues albums that you’ll hear this year…or any other. (Blue Horizon Records, released November 14th, 2011)

Buy the CD from Amazon: Dion’s Tank Full of Blues