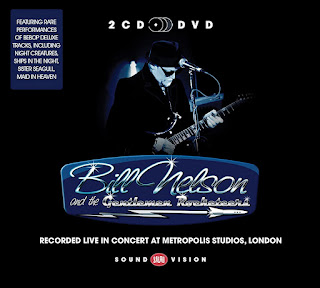 One of the best things to come about in the wake of the Internet isn’t the availability of free music, it’s the increased availability of music, period…and for a hardcore rock ‘n’ roll geek like the Reverend, jus’ trying to get his collector’s groove on, it’s been a godsend! Back in the dark ol’ pre-net daze, pinheads like yours truly had to thumb through well-worn back issue copies of music zines like Trouser Press, Creem, and Bomp! to finger hard-to-find albums from such far-flung locales as Canada and England to lust after.

If you were lucky, as I was for a short while, you lived near a collectors-oriented record establishment like Dearborn Music that stocked a healthy bunch of import singles and elpees; or maybe you had a monthly record show in town where you could put down your hard-earned coin on that limited edition 10” Clash EP or Italian Kate Bush 45 with the alternative studio version of “Wuthering Heights.” Otherwise, the demented rockist had to depend on wee mail order companies that advertised in the back pages of the aforementioned publications to carry that one shining stack ‘o wax that you coveted. You would send a postal money order off to the advertiser and ask for a copy of THAT record for your slow-growing but oh-so-cool record collection, waiting patiently by the mail box for an official government employee to deliver your fab new tunes…


The Internet has rendered much of that dance moot, providing the hunter/gatherer/hoarder with abundant opportunities to find just about any recording ever made. It’s also made the acquisition of formerly difficult import albums as easy as clicking a mouse on the right website. Case in point – Bill Nelson’s Recorded Live In Concert At Metropolis Studios, London is a lush, deluxe set with two CDs and a DVD documenting an intimate, invitation-only March 2011 concert by Nelson and his band the Gentlemen Rocketeers. Nelson is a British artist, caught on film and tape in London, the album released by a Canadian record label, and available through the magic of the Internet for we rabid fans in the U.S. and elsewhere. For a diehard, lifelong rock ‘n’ roll fanatic, could life get any better?

Bill Nelson is a singular talent who has forged an amazing, albeit unique career that has spanned four decades now. He is best-known, perhaps, as the singer, songwriter, and guitarist for mid-1970s U.K. glam-metal band Be-Bop Deluxe. Formed at the height of England’s glam-rock craze, Be-Bop Deluxe was more like Mott the Hoople in that they transcended glam to deliver five studio (and a live) albums of guitar-driven, proto-metal pop-rock tunes that served as a showcase for Nelson’s intricate guitar textures. After the demise of Be-Bop Deluxe, Nelson dawdled for a while with the experimental band Red Noise, eschewed the guitar entirely in favor of electronics for his frequently-misunderstood Orchestra Arcana, and quietly pieced together an impressive and prolific solo career that, while resulting in few commercial “hits” has nonetheless resulted in over 40 recordings that have earned the multi-instrumentalist a loyal following.

For the long-time Bill Nelson fan, Recorded Live In Concert At Metropolis Studios, London is a necessary addition to the ol’ collection. The fourteen-track setlist on CD one spans nearly the entirety of Nelson’s lengthy career, including solo songs, a little Red Noise, and a handful of Be-Bop Deluxe favorites, all recorded with a full band that includes flautist/saxophonist Theo Travis (Gong). The second CD is a good bit shorter, presenting a four-song solo acoustic “warm up” set that Nelson performed for the assembled crowd, including songs dedicated to his brother Ian (“A Dream For Ian”) who played with Nelson in Red Noise, and one for his friend Stuart Adamson (“For Stuart”) of Scottish rockers Big Country.


Do You Dream In Colour


Recorded Live In Concert At Metropolis Studios, London starts with “October Man,” from what was probably the closest that Nelson ever came to a hit album, 1982’s The Love That Whirls. An engaging slice of new wave romanticism, the song reminds of Simple Minds or similar 1980s-era fare, with Goth-tinged vocals, mournful horn solos, doodling keyboards and synths, and shards of angular guitars. The song has surprisingly dated fairly well, unburdened by the period clichés that hang like an albatross around the neck of a lot of the decade’s early musical experiments. It doesn’t take Nelson long to jump into the Be-Bop material, though, beginning with “Night Creatures,” a somber mid-tempo dirge from the band’s 1974 debut Axe Victim. Sounding more than a little like David Bowie in both his vocal phrasing and in the songwriting, the song’s lush, swirling instrumentation serves to embrace and frame the lyrics nicely.

Switching gears, Nelson launches into the fluid 1992 solo track “God Man Slain,” which oddly evokes late-period Bowie, but with a deceptive energy and zeal driving Nelson’s hypnotic fretwork and Travis’ random, soulful blasts of sax. By the time that Nelson returns from his solo trip to vintage Be-Bop fare, the audience is fully engaged, and the guitarist straps on his faithful Gibson ES-345, the same instrument he used on stage and to record with Be-Bop. “Adventures In A Yorkshire Landscape,” also from the band’s debut, is a sumptuous musical showcase that displays not only Nelson’s immense six-string skills, but those of the Gentlemen Rocketeers as well, the band erecting a magnificent instrumental backdrop against which Nelson embroiders his complex, elegant patterns. Travis’s nuanced flute solo colors the instrumental passages and remind of jazz legend Herbie Mann.

The short-lived Red Noise period is represented by a pair of fine tunes, “Furniture Music” and “Do You Dream In Colour,” both of which fall on the edgier side of late 1970s era new wave. The former is a martial, up-tempo construct with forceful, riffish instrumentation, and machinegun vocals – kind of like Gary Numan with less synths, bigger drum sounds, and tangled strands of wiry guitar. The latter opens with an oscillating synth buzz before devolving into an almost popish syncopated rhythm that reminds of Talking Heads, Nelson’s oddball vocals surrounded by electronic dots and dashes. Some of my personal Be-Bop favorites come from the band’s 1975 sophomore album Futurama, with which Nelson took a decidedly left-hand turn towards progressive-rock territory.


Evidently dissatisfied with the outcome of Axe Victim, Nelson fired everybody and got new musicians for Futurama, changing the band’s sound immensely. While critics at the time questioned the prog-rock tendencies of Futurama, the album’s best songs evince a sort of prototype pop-metal songwriting and performance that would influence the coming “New Wave of British Heavy Metal” bands. The larger-than-life “Maid In Heaven” offers up some of Nelson’s most inspired guitarplay, the song’s memorable riff and infectious melody matched by sing-a-long lyrics and the guitarist’s great tone and energy.

By contrast, “Sister Seagull” is a hauntingly beautiful performance with cascading instrumentation, judicious use of a melodic riff, and Nelson’s high-flying solos. Performed beautifully here, the song’s emotional lyrics are made all the more poignant by the powerful musical accompaniment, including the crying seagull guitar licks at the end. As satisfying as the full-band performances may be, the four-song instrumental set provided by Nelson on the second disc is just as impressive. The shimmering guitarplay featured on “Beyond These Clouds the Sweetest Dream” is stunning in its scope and execution, while “Golden Dream of Circus Horses” is just as powerful.

The guitarist is accompanied on this one by Theo Travis, whose ethereal flute and saxophone flourishes meld perfectly with Nelson’s exotic fretwork in providing a solid example of the artist’s flirtation with a jazz-rock fusion sound. Nelson is accompanied on the two aforementioned tribute songs by a pre-recorded, almost orchestral soundtrack on synthesizer or a synclavier, but his live-wire guitar playing on both is simply sublime, the guitarist delivering pure emotion through his fingertips. The DVD part of the set includes a multi-camera shoot of both the full band and solo performances, and the sound on all of the discs is near-perfect, benefiting from the small studio venue and Nelson’s firm hand in overseeing the final mix.


Listening to Bill Nelson is a lot like trying to tell a stranger about rock ‘n’ roll...the man’s lifetime of music-making is far too intricate, varied, and uniquely personal to nail down firmly for more than a brief moment. Words fail in trying to describe the instrumental virtuosity and diverse artistic vision displayed by Nelson throughout 40 years and as many recordings. The man makes music that is at once both frequently challenging and enormously entertaining, and Recorded Live In Concert At Metropolis Studios, London offers not only a career-spanning musical introduction to a one-of-a-kind artist, but also a rare visual document of Nelson’s talents. For fans, this one is a no-brainer, while the curious newbie will certainly fall head-over-heels after checking out Nelson’s Recorded Live In Concert At Metropolis Studios, London. (Convexe Entertainment, released May 24th, 2012)