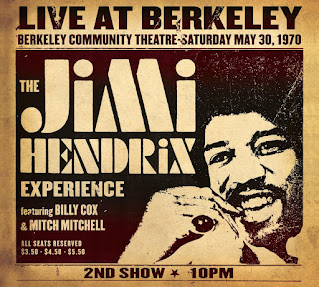 It’s no secret among the cognoscenti that blues-rock guitar great Jimi Hendrix was an inconsistent onstage performer. When he was hot, he burned as bright as a supernova, but when he was not, he could be dull and lackluster. It was part of the blessing and the curse of Hendrix’s talents, that he often seemed to view live shows as an inconvenience thrust upon him by his manager when instead the guitarist would rather be sequestered in the studio experimenting with sound.

In an effort to scour the tape vaults of anything remotely of commercial value, Experience Hendrix – the corporation formed by the late guitarist’s relatives to preserve Jimi’s legacy and exploit the hell out of his musical catalog – has for years released live recordings for a rabid fan base to devour. Live At Berkeley, featuring a Jimi Hendrix Experience comprised of Hendrix, long-time friend and bassist Billy Cox, and drummer Mitch Mitchell, captures the band’s second set at the Berkeley Community Theatre from Saturday night, May 30, 1970. The album documents a solid eleven-song performance with good, although not great sound (well, it was recorded over 40 years ago), definitely showcasing Hendrix at his best onstage.

The performance found on Live At Berkeley has long been a fan favorite, and as both sets were originally filmed and recorded that Saturday night, both have been frequently bootlegged on LP and CD in the four decades since. For fans that live their lives above ground, however, with no previous (bootlegged) exposure to this particular band performance, the Berkeley shows are a revelation. The second set documented by Live At Berkeley cranks up slowly, like the first glowing embers of an out-of-control wildfire. “Pass It On,” which fuses Hendrix’s “Straight Ahead” with improvised lyrics and lots of flamethrower solos, is loose and funky, with Cox and Mitchell delivering a ramshackle rhythm behind Jimi’s chaotic leads.

By the time the band hits three songs in and “Lover Man,” this rock ‘n’ roll locomotive is beginning to fire on all cylinders. Hendrix’s hurried vocals are propelled forward by Cox’s wickedly twisted and fast-paced bass line, Mitchell’s explosive percussion allowing the guitarist to embroider the song with what sound like experimental, stream-of-consciousness styled solos that further Hendrix’s redefining of electric guitar. “Stone Free” is a rampaging rocker with Hendrix’s half-buried vocals overshadowed by his wiry fretwork, Cox’s throbbing bass, and Mitchell’s crashing cymbals. By the time that Jimi cuts loose with his solo two and a half minutes in, he’s clearly entered the stratosphere and running on pure adrenalin and imagination.

Of course, Hendrix doesn’t ignore the fan favorites on Live At Berkeley, trotting out both the reliable “Hey Joe” and the legendary “Foxey Lady” for an enthusiastic audience. The former is provided its usual malevolence with Hendrix’s darkly-elegant guitar lines and mournful vocals while the latter is pumped-up larger than life with and extended and amplified performance of the familiar intro as Hendrix’s axe howls and squeals with feedback. The arrangement of “Foxey Lady” lends itself to improvisation, and Cox coaxes a heavy bass sound as the foundation beneath Jimi’s screaming guitarplay. Another of the band’s early hits, “Purple Haze,” is provided a similar treatment, scorched-earth guitar layered above the driving drumbeats and sledge-hammer bass. Hendrix stretches out the song’s well-worn riff with short, but sharp solos and heaps of echo and buzz.

It wouldn’t be Jimi Hendrix if he didn’t trot out a couple of songs from the bluesier side of his milieu, and in Berkeley that night he delivered a powerful reading of his “I Don’t Live Today.” Mitchell’s fluid, tribal rhythms intro the song with a short drum solo before Hendrix kicks in with an electrifying barrage of guitar licks. Call it “blues on steroids” if you will, but the song is one of the finest, albeit misunderstood of the Hendrix catalog, his blustery solos channeling more emotion and empathy in a few seconds than a lot of guitarists can muster across an entire album. This album’s “Voodoo Chile (Slight Return)” represents one of the guitarist’s blockbuster performances, ten-minutes-plus of fiery blues and rock fused into an incredible display of talent and audacity with otherworldly lyrics and an incredible Mitch Mitchell drum clinic that keeps up with the guitarist nearly step for step.

You’d be hard-pressed to find a live Hendrix performance with more electricity than that documented by Live At Berkeley. The refashioned Jimi Hendrix Experience begins the second set with a slow rolling boil and builds to a livewire crescendo, closing out the performance with a lengthy jam that (figuratively) blows the roof off the Berkeley Community Theatre. However – and this is a big “if” here, folks – considering that this performance was released a mere nine years ago when Experience Hendrix had its deal with MCA Records, is buying it again a real necessity?

There are no additional tracks on this new reissue, only a mild upgrade in sound and, well, honestly, if you have this CD already, there’s no reason to upgrade. Spend your money on the DVD/Blu-ray release of Live At Berkeley with the new footage instead. On the other hand, if you’re a Hendrix newbie and haven’t heard this stuff before, run to your local music retailer and grab up a copy of both the Live At Berkeley CD and the DVD. Now, if we could only get a CD release of the Experience’s first Berkeley set, the hardcore faithful would shut up and be happy! (Legacy Recordings, released July 10, 2012)