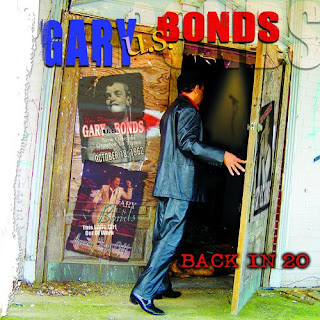 When the annals of ‘60s soul are finally written, the name of Gary ‘U.S.’ Bonds is sure to be included. Although not as famous as Otis or Aretha or even Solomon Burke, Bonds’ immense influence on rock ‘n’ roll was sealed with the 1961 hit single “Quarter To Three,” a rollicking musical party that inflamed the imaginations of numerous future rockers, including Bruce Springsteen.

Twenty years after his commercial peak, Bonds was “rediscovered” in 1981 by Springsteen and Little Steven (Van Zandt), the trio creating a pair of excellent rock-n-soul recordings. After an overlooked 1984 album that suffered due to the lack of an Asbury Park connection, Bonds quietly hit the oldies circuit…

Two decades later, Gary ‘U.S.’ Bonds has returned with a fine collection of red-hot R&B and scorching blues tunes titled, well, Back In 20. If the slashing opening guitarwork on “Can’t Teach An Old Dog New Tricks” sounds familiar, it’s because guest Bruce Springsteen has used variations on the riff before, if not always as effectively. When Bonds comes in with his semi-biographical tale, the song explodes into a raucous blend of soulful vocals, madcap instrumentation and jump-n-jive spirit. Much of Back In 20 hits a similar groove, Bonds jumping between original rave-ups like “Murder In the First Degree” and classic soul covers like “Fannie Mae” or the Otis Redding ballad “I’ve Got Dreams To Remember.”

Guests on Back In 20 include Springsteen and Southside Johnny, Phoebe Snow and former Allman Brothers guitarist Dickey Betts. The guests don’t overshadow Bonds’ fine soul band, however. Led by guitarist Mark Leimbach, who co-wrote several of the original songs, the band builds a solid foundation for Bonds’ powerful vocals. With a unique vocal inflection and a raw quality that has more in common with Chuck Berry than with the church-nurtured, silk crooning of Sam Cooke or Jackie Wilson, it’s easy to see why a handful of early-60s Bonds hits proved so influential with young rockers. Gary U.S. Bonds may not roll out any new tricks with Back In 20, but why should he when the old tricks still sound so good? (MC Records, released 2004)