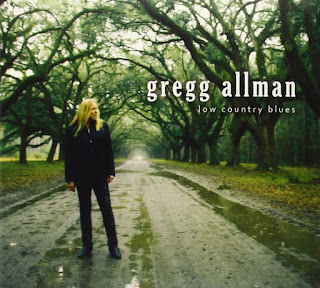 Gregg Allman’s seventh solo album and his first to be released in almost 14 years, Low Country Blues resulted from a chance meeting between Allman and musician/producer T-Bone Burnett. The two men shared memories of favorite records, mutual friends, and even WLAC-AM, the groundbreaking Nashville radio station that blasted out blues and R&B records to a large audience across the Southeast and Southwestern U.S. during the 1950s and ‘60s with its 50,000-watt clear channel signal. Allman and Burnett also talked about working together on an album of blues and R&B covers.

Allman entered a Los Angeles studio in January 2010 with Burnett, guitarist Doyle Bramhall II, bassist Dennis Crouch, and drummer Jay Bellerose to record the songs that would become Low Country Blues. The album was originally scheduled for mid-2010 release, but when Allman, suffering from chronic Hepatitis C, received the chance for a liver transplant he underwent the successful surgery. He spent months rehabbing both physically and artistically, getting his body and voice back in shape to tour in support of Low Country Blues, the album another triumph in a lengthy career with several such landmark moments.

The songs chosen by Allman and Burnett to record cover a wide range of blues and R&B styles, most of them obscurities but a few of them inspired re-imaginings of well-known and regarded blues standards. Low Country Blues opens up with a wonderful example of country blues in Sleepy John Estes’ “Floating Bridge.” While Allman puts his high-lonesome wail and Southern twang to good use on Estes’ gospel-tinged lyrics, a trio of guitars vibrates wildly behind him, assisted on the low end by Crouch’s booming acoustic bass. Whether it’s Doyle Bramhall II, Hadley Hawkensmith, or Burnett himself wielding the six-string, their electrifying and often discordant fretwork provide a perfect counterpoint to Allman’s soulful vocals.

After romping through the spirited R&B rave-up that is “Little By Little,” Allman and crew go back down the Delta with an inspired reading of Skip James’ signature song “Devil Got My Woman.” Allman plays this one perfectly with a trembling, sorrowful vocal performance while Colin Linden adds some nice flourishes with his Dobro and Dr. John adds a little New Orleans styled piano. Again, Bramhall’s guitar provides a bit of discordance that enhances the song’s emotions rather than detracting from the overall dark vibe.

Muddy Waters’ are big shoes to fill, and his “I Can’t Be Satisfied” is a Chicago blues classic, but Allman does it up right. With gently bleating horns in the background, wide slashes of colorful guitar, and Crouch’s industrial-strength bass line, Allman roars and moans the words as well as anybody (short of ol’ Muddy himself, of course). Emotionally-charged and sounding like a million dollars, “I Can’t Be Satisfied” may be the creative high point of Low Country Blues.

Checking On My Baby

Allman and his bandmate Warren Haynes penned the only original on the album, “Just Another Rider” a raw R&B scorcher with a slow, funky groove constructed by bassist Crouch and drummer Bellerose. Several guitarists embellish the rhythm track, but it’s Allman’s smoky, growling vocals that put the pair’s imaginative lyrics over the top. B.B. King’s “Please Accept My Love” is a 1950s-styled throwback with jazzy undertones, a subtle horn section, Dr. John’s rolling piano playing, and flashes of guitar. While Allman’s vocals are nowhere near as silky as King’s, he does a fine job in capturing the emotion of the lyrics.

Amos Wilburn’s bittersweet “Tears, Tears, Tears” puts Dr. John’s mournful piano notes right behind Allman’s crying vocals. As the horn section blows its lonely heart out, Allman croons out his woeful tale of heartbreak. Low Country Blues goes back to Chicago with covers of a couple of the city’s blues giants, Magic Sam and Otis Rush. The hypnotic recurring guitar riff of Magic Sam’s “My Love Is Your Love” is perfectly reproduced by Bramhall, while Allman’s Hammond B-3 chimes away low in the mix beneath the singer’s tortured vocals. A full backing vocal choir adds to the song’s big band feel while Crouch and Bellerose keep a buoyant rhythm track sizzling like a hot engine on a summer day.

Otis Rush’s “Checking On My Baby” is a slow-burning, tear-jerking blues number, Allman’s bruised vocals accompanied by hot licks from Bramhall and/or Burnett’s guitar, with notes from Allman’s B-3 and Dr. John’s piano flowing like a river of tears beneath the vocals. It’s a pretty strong moment, and easily one of the best versions of the song you’ll ever hear. Low Country Blues closes with a blustery arrangement of the traditional “Rolling Stone,” Allman and Burnett reducing the song to its trance-blues roots with a hypnotic percussion line, deep bass, sparks of guitar and mandolin, and Allman’s stark vocals. It’s a simply enchanting moment that perfectly captures the blues heart in the middle of the song.

While Allman’s day job at the fore of the Allman Brothers Band often has him calling on his blues, R&B, and soul influences in creating music that is firmly in the blues-rock form, with Low Country Blues he abandons any such preconceived notions to deliver an almost pure blues album.

With producer Burnett – the “go-to guy” these days for artists attempting to capture the magic of ages past – Allman and a top-notch band have spun pure magic with Low Country Blues, creating music that sounds contemporary while drawing strongly from the past. Make no mistake, this is one of the best blues albums you’ll hear in this or any other year. By returning to his roots so masterfully, Gregg Allman has, perhaps, found a blueprint for his future. (Rounder Records, released ‎ November 3th, 2010)