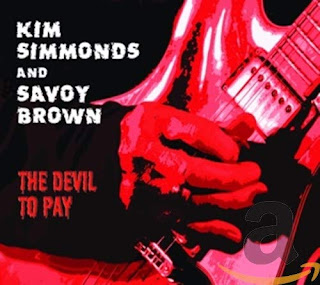 After a half-century spent “treading the boards,” Savoy Brown has become a British blues institution. Formed by guitarist Kim Simmonds in 1966 as part of the blues-rock boom that included Taste, Free, and Gary Moore’s Skid Row, Savoy Brown quickly found a lasting identity in Simmonds’ fluid guitar lines. Commercially-successful and critically-acclaimed 1970s-era albums like Looking In and Hellbound Train helped introduce many a teenage punter to the blues idiom.

Eternally led by Simmonds, Savoy Brown has kept the flame of guitar-driven blues-rock burning bright long after many of their contemporaries have gone home. While the band stumbled a bit during the 1990s, releasing a string of albums featuring more chaff than wheat, they’ve more than made up for it over the past decade with solid LPs like Voodoo Moon and Goin’ To the Delta. Savoy Brown’s The Devil To Pay is their 10th since 2000 and, like most of their efforts since the new millennium, it’s a mixed bag, musically. Fronting, essentially, the same road-tested band since 2009 – minus vocalist Joe Whiting – the trio of Simmonds, bassist Pat DeSalvo, and drummer Garnet Grimm is a dynamic blues-rock bar band capable of putting on a heck of a live show; on record, results may vary…

The Devil To Pay is a mish-mash of blues styles, from the jazz-flecked slow-burn of “Ain’t Got Nobody” and the Chicago-flavored vamp of “Bad Weather Brewing” to the twang ‘n’ bang title track or the blustery, heavy blues of “Evil Eye.” The band’s instrumental mastery allows them to pull off these varying hues easily, but the sticking point is Simmonds’ vocal skills...or lack thereof. On some songs – like the boogieing “Oh Rosa” or the Texas blues romp “I’ve Been Drinking” – Simmonds’ raging fretwork overshadows weak vocals, but on other performances, the strain is evident. Simmonds’ guitar playing is beyond reproach, remaining as inventive and electrifying as ever, but he needs a bona fide singer like Chris Youlden or Dave Walker that allows him to just play guitar. This shortcoming makes The Devil To Pay an entertaining blues-rock disc that could have been so much more. (Ruf Records, released August 12, 2015)

Buy the CD from Amazon: Kim Simmonds & Savoy Brown’ The Devil To Pay