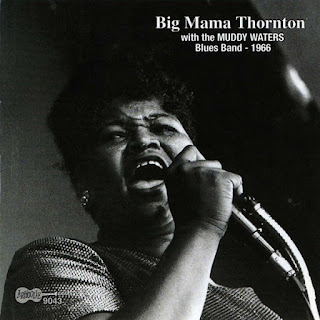 If she is remembered by any but the most dedicated blues historians, Willie Mae “Big Mama” Thornton is best known for her 1953 hit single “Hound Dog.” The song spent seven weeks on top of Billboard magazine’s R&B charts and made Thornton a minor star on the SE/SW chitin’ circuit. Later appropriated by Elvis Presley, his 1956 recording of the song overshadowed Thornton’s considerable success and launched Presley’s career beyond the confines of Sun Records.

It’s high time that modern blues fans rediscovered the talented Thornton. Signed to Peacock Records in 1951, Thornton released a number of singles for the label throughout the decade. None hit as big as “Hound Dog,” however, and Thornton was eking out a meager living through sporadic performances well into the ‘60s. The singer with the giant voice hooked up with blues fan and Arhoolie label founder Chris Strachwitz for a handful of mid-‘60s album releases that helped redefine her career. Strachwitz had recorded an inspired Thornton performance in Europe with a band led by guitarist Buddy Guy, and he thought that lightning might strike twice. He arranged for Muddy Waters’ band to back Thornton on these April 1966 sessions; Thornton’s powerful vocals perfectly matched by the group of veteran performers.

After all these years, the release of Thornton’s With the Muddy Waters Blues Band - 1966 is a revelation. Thornton is in good form on songs like the soulful “I’m Feeling Alright” and the dirty blues of “Black Rat.” Waters’ band – which included Otis Spann on piano and James Cotton soaring on harmonica – embraced the material, their immense skills amplifying Thornton’s performances. Especially welcome is Waters himself on guitar, the blues giant’s often-overlooked six-string prowess on display in songs like “Everything Gonna Be Alright” and “Sometimes I Have A Heartache.” The gospel-tinged “Guide Me Home” foreshadows what might have been if Thornton had been able to record the album of spiritual tunes that she wanted to while “Big Mama’s Bumble Bee Blues” is a more secular example of traditional blues double-entendre lyrics.

The long overdue CD release of With the Muddy Waters Blues Band - 1966 also includes seven previously unreleased bonus tracks, including alternate takes of “Black Rat,” “Gimme A Penny” and “I’m Feeling Alright.” It is the new songs that really stand out, though. The lively instrumental “Big Mama’s Shuffle” showcases Thornton’s harmonica skills, an instrument she would use more and more on her work into the 1970s, the song becoming a literal battle between Thornton and the raging James Cotton. “Since I Fell For You” is an old-fashioned torch song, drenched in emotion and dripping with passion. The album-closing “Big Mama’s Blues” is a slow, smoky Chicago-styled blues, Spann providing rhythm on the ivories while Cotton plays off of Thornton’s vocals with an impressive performance. It was well worth the almost three-decade wait to hear these tracks.

Remastered for CD from the original three-track (!) recordings, Thornton’s With the Muddy Waters Blues Band – 1966 sounds damn good for its age, suffering little from the digital transfer and playing loud, raw and vibrant. Hopefully some blues fans will pick up the album simply because of the Muddy Waters connection, or maybe the recent Janis Joplin tributes and revivals, which include Joplin’s version of Thornton’s “Ball And Chain,” will cause some young listeners to seek out the original. Either way, they’ll be rewarded with the ample talents of one of the blues most underrated and unique vocalists, Big Mama Thornton. (Arhoolie Records, released January 29th, 2007)