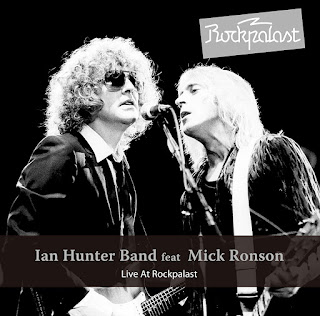 In the absence of legitimate contemporary rock ‘n’ roll heroes, a sort of “cult of personality” has grown up around a number of admittedly eccentric 1960s-and-‘70s-era musicians. From Nick Lowe and Robyn Hitchcock to Todd Rundgren and other aging rockers raised in the long shadows of the second World War, the digital era has been kinder to them than most, prompting a rediscovery of their early, acclaimed work by a younger audience, extending their careers long past the ostensible commercial “sell by” date. In many instances, it has enabled these artists to grow old with dignity and grace, allowing them to deliver some of the best music of their lives in the 21st century.

Of all of these fellow travelers, Ian Hunter is the oldest and, perhaps, the most iconoclastic. A late arrival to U.K. glam-rock cult faves Mott the Hoople, Hunter quickly took over the band’s creative reins and became its best-known member. (Don’t think so? Quick, name another Mott member other than Hunter or guitarist Mick Ralphs…) Hunter’s often-snarky, Dylan-inspired wordplay and the band’s guitar-heavy hard-rock sound would earn them a modicum of fame, if little fortune, and by the mid-1970s, realizing that the party was coming to a close, Hunter jumped the Mott ship for a solo career, taking former David Bowie/Lou Reed guitarist, and recent band addition Mick Ronson with him.

Although a direct line can be drawn from Mott the Hoople to the intelligent punk-rock of the Clash and the less-intellectual, but admittedly more commercially successful pseudo-metal of Def Leppard, it is Ian Hunter’s sporadic solo career that has influenced a generation of British, as well as a lesser number of American musicians. Beginning with his self-titled 1975 debut, which yielded the classic “Once Bitten Twice Shy,” through the end of the decade and a handful of albums culminating in 1979’s You’re Never Alone With A Schizophrenic, which entered “Just Another Night” and “Cleveland Rocks” to the rock ‘n’ roll lexicon, Hunter wrote a musical legacy that continues to resonate loudly even in recent works like 2007’s Shrunken Heads and 2009’s Man Overboard.


In April 1980, reunited with his friend and longtime musical foil Ronson (management problems having kept the two madmen apart for several years), Hunter performed for the popular German TV show Rockpalast. Translating, roughly, as “Rock Palace,” the program has been broadcast since 1974, airing performances from, literally, hundreds of rock, blues, jazz, and other artists. Video clips from the TV show have been a staple of YouTube since the dawn of that website, but only within the last couple of years has Germany’s MIG Music made a number of full-length performances available on CD and DVD. Hunter’s 1980 Rockpalast performance, prominently featuring guitarist Ronson, stands as a true gem among an eclectic and varied catalog offered by MIG Music.

Fronting a band that included Ronson, bassist Martin Briley, a pair of keyboard players, and a drummer, Hunter rips through a baker’s dozen of songs from both his solo albums as well as his tenure with Mott the Hoople. Performing in front of an enthusiastic German audience at the large Grugahalle arena in Essen, Germany, the first half of Live At Rockpalast mimics the tracklist, if not the actual performances, found on Hunter’s 1980 live release Welcome To the Club. The album-opening instrumental “F.B.I.” is effectively a raucous band intro fueled by Ronson’s wiry fretwork and a driving rhythm that leads straightaway into “Once Bitten Twice Shy,” the hoary hard-rock chestnut stripped down here, provided a slight boogie-rock framework with Hunter’s wry vocals dancing atop a sparse arrangement that explodes into a full-blown rock ‘n’ roll cyclone.

The beautifully lovestruck “Angeline” (a/k/a “Sweet Angeline,” from Brain Capers) is the first of several Mott the Hoople treasures recreated here, the song’s simple, slightly-twangy construction reminiscent of Nick Lowe’s Brinsley Schwartz, Hunter’s passionate vocals rising above a cacophony of chiming guitars and cascading drumbeats. A pair of beloved tunes from that band’s breakthrough 1973 album Mott are provided similar reverence, the wistful “I Wish I Was Your Mother” benefiting from Ronson’s elegant guitarplay and Hunter’s haunting, weary vocals while the up-tempo “All the Way From Memphis” displays all the reckless abandon and joyful banter of the original.


Of Hunter’s modest solo hits, “Cleveland Rocks” may be better-known than “Just Another Night” due to its use as the theme of The Drew Carey Show for several years, performed there by the Presidents of the United States of America (remember “Lump”?). Hunter’s version kicks ass, hands down, the singer declaring the city one of the birthplaces of rock ‘n’ roll and then kicking out the jams with a high-octane performance that is over-the-top delicious in its unbridled energy. Hunter’s vocals ride a wave of distorted guitars and crashing rhythms, feedback creeping in at the edges as the singer delivers the lyrics with a punkish sneer and a sly grin. “Just Another Night” ain’t chopped liver, though…Hunter’s swaggering vocals sit comfortably within a blanket of sound, keyboards tinkling above a sweaty, grinding dancefloor rhythm.

Live At Rockpalast includes performances of several of Hunter’s lesser-known songs as well as an intriguing cover of the obscure mid-1960s Sonny Bono single “Laugh At Me.” A spry pop-rock tune with an undeniable melody, vocal harmonies, edgy guitarwork, and period-perfect alienated teen lyrics, Hunter and crew crank up the pathos and turn up the amps and deliver a riveting performance. “We Gotta Get Out Of Here” debuted on Welcome To the Club and, sadly, wouldn’t be reprised on any later studio albums. Here the song is a hard-rocking sledgehammer with an infectious chorus, scraps of honky-tonk piano, tense guitar, bashed cymbals, gang vocals, and an overall crescendo of chaotic instrumentation.

The set, somewhat appropriately, closes with the Mott hit “All the Young Dudes” and Ronson’s “Slaughter On 10th Avenue.” The former, handed to the band by the album’s producer David Bowie, is played embarrassingly straight. Ronson’s guitar mimics perfectly Mick Ralph’s original rakish note-picking, and Hunter’s vocals sound every bit as punkish in 1980 as they did in 1972. The upbeat “Dudes” leads right into Ronson’s languid instrumental; taken from the guitarist’s 1974 solo album by that name, the song starts out slow and jazzy and builds to an enormously satisfying finish.


Ian Hunter and Mick Ronson would more or less carry on their musical collaboration until Ronson’s untimely death in 1993, frequently touring throughout the early 1980s as the Hunter Ronson Band of which, sadly, only bootleg recordings seem to exist. When Hunter went on hiatus during the latter half of the 1980s, Ronson continued to record and produce, touring with Dylan and working with artists as diverse as Morrissey, Meatloaf, Roger McGuinn, and John Mellencamp, among others.

The two friends would reunite for Hunter’s 1990 album YUI Orta, and performed together one last time in 1992 during a tribute to Queen’s Freddie Mercury that would be documented on Ronson’s posthumous solo album Heaven and Hull. For a couple of nights in Germany in 1980, however, both artists were at the top of their game, and Live At Rockpalast captures the magic that was Ian Hunter and Mick Ronson together. (MIG Music, released August 8, 2012)