An Evening with Wild Man Fischer coming to CD! 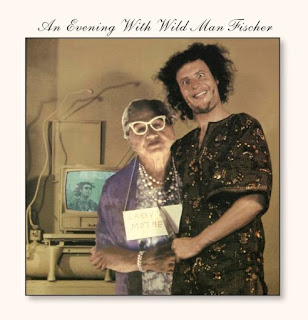 Today’s your lucky day, Bunkie, ‘cause Gonzo Multimedia is reissuing the notorious underground classic LP An Evening with Wild Man Fischer on CD for the very first time on January 29th, 2016. Produced by Frank Zappa, the album has taken on an almost mythological status since its original release in 1968, with vinyl copies selling in the neighborhood of a C-note (if you can find one). Long out of print, An Evening with Wild Man Fischer has never received legit CD release until now…

Larry Fischer was a tragic figure; diagnosed with paranoid schizophrenia and bipolar disorder, Fischer roamed the streets of Los Angeles singing his songs for a dime for anybody willing to listen. Discovered by Frank Zappa, who released Fischer’s debut album on his Warner Brothers-distributed Bizarre Records imprint, An Evening with Wild Man Fischer featured musical accompaniment by Zappa and members of the Mothers of Invention behind Fischer’s fractured vocals, Zappa reproducing Fischer’s street performances in the studio. Released as an ambitious two-LP set, the album offered up 36 songs – some no more than short, sharp stream-of-consciousness rants while others were insightful, revealing autobiographical poems set to minimalist instrumental backing.

After the release of An Evening with Wild Man Fischer, the singer and Zappa had a falling out over royalties (Zappa held the rights to the album). After Zappa’s death, his widow Gail refused to release the album on CD because she felt that it displayed Frank in a poor light. Fischer later hooked up with Rhino Records, and released three albums for the label – 1977’s Wildmania, 1981’s Pronounced Normal, and 1983’s Nothing Scary – and he would become a minor underground culture celebrity. He was featured in 2004 comic book The Legend of Wild Man Fischer by artist/writer Dennis Eichhorn, and the same year Fischer performed on ABC TV’s Jimmy Kimmel Live! In 2005, a documentary film on Fischer, Derailroaded: Inside the Mind of Wild Man Fischer, debuted at the SxSW Film Festival in Austin, Texas.

Fischer passed away in June 2011 at the age of 66 from heart problems. With the recent death of Gail Zappa, who administered the Zappa estate, the road was obviously paved for the long overdue reissue of Fischer’s most notorious recording. An Evening with Wild Man Fischer is a brilliant, disturbing portrait of outsider music, Fischer an artist with big dreams and talent on par with better-known cult artists like Wesley Willis or Daniel Johnston.

“Some Historical Notes”
1. The Taster
2. Story of the Taster
3. The Rocket Rock
4. Explanation and Dialog
5. Dream Girl
6. Dream Girl Explanation
7. Serrano Beach
8. Success Will Not Make Me Happy
9. Wild Man on the Strip Again