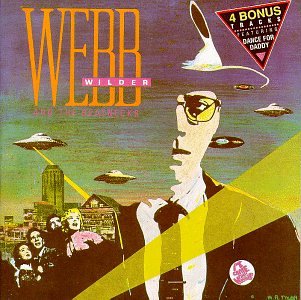 Brothers and sisters, I want to share the good word about Webb Wilder and the Beatnecks and their magnificent debut It Came From Nashville! This will make the third time since 1987 that the Reverend has reviewed this particular album. Not surprisingly, in a corporate music world dominated by airheaded, lip-syncing Barbie dolls and angry male fashion models with out-of-tune guitars, It Came From Nashville holds up remarkably well. In fact, much like fine wine, this version – the album's third incarnation (vinyl, CD w/bonus tracks, CD w/more bonus tracks) – has only gotten better with age.

For you poor souls who have never experienced the greatness of the man known to legions as "WW," this is where it all began, a humble introduction to a Wilder world. Roaring into the Music City like a drunken tornado sometime during the mid-80s, WW quickly assembled a top-notch musical hit squad, a finely-tuned machine of rock 'n' roll salvation helmed by the man behind the throne, Bobby Field. Although a vinyl recording is a poor substitute for the magnificence that is WW in person, It Came From Nashville did a pretty doggoned good job of capturing the spirit – the zeitgeist, if you will – of the man from Mississippi. Wilder, Fields and crew masterfully mixed roots-rock, country, and blues with elements of psychdelica, swamp rock and surf music. Imagine Hank Williams, Robert Johnson and Screamin' Jay Hawkins sharing a beer at the crossroads in a midnight jam session and you'd come close to the sound of It Came From Nashville.

Friends, Webb Wilder and the Beatnecks hit Nashville like a double-shot of whiskey with a six-pack chaser. Along with Jason & the Nashville Scorchers, WW and his posse allowed a bunch of cornpone punk rockers to break loose and embrace the reckless country soul of their ancestors. After eighteen years, the songs on It Came From Nashville still rock like a house afire! From "How Long Can She Last," Field's ode to youthful indiscretion, to the original album-closing instrumental rave-up "Ruff Rider," these songs are muscular, electric and 100% high-octane rock 'n' roll. An inspired cover of Steve Earle's "Devil's Right Hand" showcases both Wilder's sense of humor and his deep, friendly baritone in this tragic tale. "One Taste Of The Bait" speaks of the dangers of love while "Is This All There Is?" is a kiss-off to failed romance on par with Dylan's "Positively 4th Street."

The original CD reissue bonus tracks are included here, a motley bunch of spirited covers that illustrate Wilder's range and tastes. From a raucous rendition of Johnny Cash's "Rock 'n Roll Ruby" to a swinging reading of Steve Forbert's "Samson And Delilah's Beauty Shop," these are all keepers. Fields' instrumental "Cactus Planet" provides a rollicking good time while "Dance For Daddy" is a down-and-dirty, leering rocker with scrappy guitarwork. The six new live tracks included here were culled from a vintage 1986 Nashville performance at the world-famous Exit/Inn and include rarities like the rockabilly-flavored "Hole In My Pocket" and an early version of fan favorite "Rocket To Nowhere."

If It Came From Nashville introduced the world to its rock 'n' roll savior, the album also marked Bobby Field's emergence as a songwriter of some skill and knowledge. These songs have held up so well over time because they are rooted in the deep tradition of rock, blues and country that was forged by pioneers like Elvis, Hank and Chuck. Unfortunately, the world has turned so much that these men have mostly been lost in the haze of pre-fab pop stars and soft drink advertising. Even a prophet like WW is without honor in his own country, although a loyal cult of followers continues to keep the flame burning. Rescued from the abyss of obscurity, It Came From Nashville is an important document of a time when giants roamed this planet and men were unashamed to follow the Webb Wilder Credo:

Review republished from the Reverend's The Other Side of Nashville book