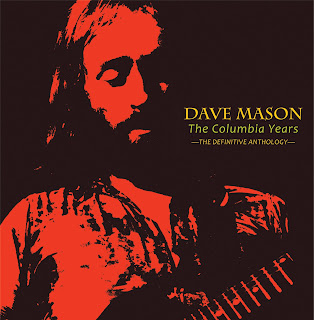 British singer, songwriter, and guitarist Dave Mason is one of those underrated artists whose best solo efforts definitely brightened up the decade of the 1970s. A founding member of ‘60s-era prog-rock trailblazers Traffic, Mason contributed to Traffic’s first two albums and would later tour with the band. After performing on recordings by Jimi Hendrix, the Rolling Stones, and George Harrison, Mason launched his solo career in earnest with 1970s Alone Together album. After releasing a pair of albums, as well as a collaboration with singer “Mama” Cass Elliot, Mason signed with Columbia Records for 1973’s It’s Like You Never Left. Mason enjoyed a productive and commercially-successful tenure with the label, chalking up seven straight charting albums for Columbia between 1973 and 1980.

On March 11th, 2016 Real Gone Music will release Mason’s The Columbia Years – The Definitive Anthology, a two-disc set featuring 30 songs taken from the seven albums Mason recorded for the label. Mason’s critically-acclaimed Columbia albums included titles like the aforementioned It’s Like You Never Left, a self-titled 1974 recording, Split Coconut (1975), Certified Live (1976), Let It Flow (1977), Mariposa De Oro (1978), and Old Crest On A New Wave (1980). These albums yielded such FM radio staples as “We Just Disagree,” “All Along The Watchtower,” “Let It Go, Let It Flow,” and “Headkeeper” as well as live versions of earlier Mason songs like “Feelin’ Alright” and “Only You Know and I Know.”

The anthology includes liner notes by writer Bill Kopp taken from an exclusive new interview with Mason, and the album was re-mastered by Maria Triana at Sony’s Battery Studios. The Columbia Years will place Mason’s career in proper perspective and offer fans a solid collection of some of the artist’s best solo work.

Buy the CD from Amazon.com: Dave Mason's The Columbia Years - The Definitive Anthology
Posted by Rev. Keith A. Gordon at Friday, January 22, 2016