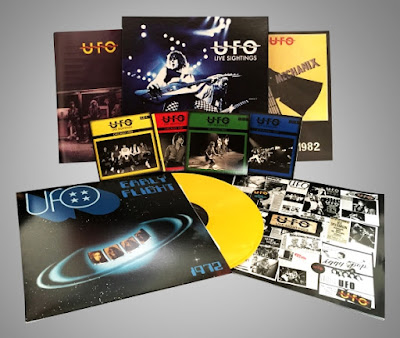 Formed in 1969 by singer Phil Mogg, guitarist Mick Bolton, bassist Pete Way, and drummer Andy Parker, British rockers UFO began life as a psychedelic-drenched space-rock band that staked out musical turf that wasn’t far away, stylistically, from what Gong or Hawkwind were doing at the time. By the time of the band’s third album – 1974’s Phenomenon – Bolton had been replaced by guitarist Michael Schenker and UFO had veered away from exploring their inner consciousness and towards a hard rock sound that would become the band’s calling card. Subsequent albums like 1975’s Force It, 1976’s No Heavy Petting, and 1977’s Lights Out would influence a generation of rockers to follow, including many bands that would create the ‘New Wave of British Heavy Metal’ in the late 1970s and early ‘80s.

On February 5th, 2016 the good folks at Cleopatra Records will release UFO’s Live Sightings, a four-CD box set that features classic live performances from the band’s successful early ‘80s concert run through the states. Guitarist Paul Chapman had replaced Schenker by the time of 1980’s No Place To Run album, and this line-up of the band delivered a handful of charting albums like 1981’s The Wild, the Willing and the Innocent and 1982’s Mechanix. The first disc of the box set features a Chicago 1980 concert with performances of songs like “No Place To Run,” “Doctor Doctor” and “Rock Bottom” among its dozen tracks. Disc two offers up a Chicago 1981 show that includes performances of “The Wild, the Willing and the Innocent” and “Too Hot To Handle” while disc three delivers a St. Louis 1982 set with performances of songs like “We Belong To The Night,” “Only You Can Rock Me,” and “Lights Out.”

The fourth disc of Live Sightings features a Cleveland 1982 set with performances of songs like “Doing It All For You” and “Live Rain.” Altogether, the four concert discs feature 46 songs, and each disc is packaged in its own mini-jacket with printed inner sleeve. Live Sightings also includes a 12”x12” sixteen-page booklet with color photos and extensive liner notes as well as duplicate printings of vintage tour programs. If that wasn’t enough for your $60 (pre-order price on Amazon as of today), Live Sightings also includes Early Flight, a special bonus vinyl LP documenting a 1972 performance featuring the only known recordings of guitarist Larry Wallis (Pink Fairies, Motörhead) on songs like “Galactic Love,” “Back In The U.S.A.,” and “Mean Woman Blues.” A very collectible set for long-time UFO fans, Live Sightings provides a lot of bang for your buck!