You wouldn’t think that there’d be much of a market for multi-disc box sets that run hundreds of dollars, but the major labels keep crankin’ out these things, so I guess that somebody’s buying them. As P.T. Barnum is alleged to have said, “There’s a sucker born every minute!”

I have to admit, though, that sometimes these things are mighty sweet…take a gander at Pink Floyd’s The Early Years 1965-1972, a wallet-whopping 27-disc box set that is receiving the Dylan treatment from Legacy Recordings on November 11th, 2016. Swaddled in swanky deluxe packaging, The Early Years box offers ten CDs, eight Blu-ray discs, nine DVDs, and five 7” vinyl singles packaged in seven individual book-style volumes, all of the discs graced with a wealth of unreleased music.

This absurd mix of quality and quantity doesn’t come cheap, Bunkie, and The Early Years is gonna set you back seven bills…six and a half if you’re lucky…but did I mention that the box also includes over 40 pieces of Floyd memorabilia such as posters, flyers, tour programs, etc to drool over?

The five 45s included in the box are presented in replica sleeves and feature such awesome A-sides as “Arnold Layne,” “See Emily Play,” “Apples and Oranges,” “It Would Be So Nice,” and “Point Me At The Sky” as well as groovy Bs like “The Scarecrow” and “Careful With That Axe, Eugene.” 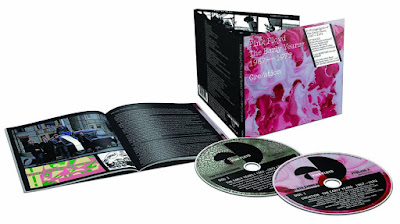 For those of us of, well, more ‘modest’ means (i.e. we’re not freakin’ millionaires…), Sony Legacy will also be releasing the two-disc “highlights” set Cre/ation – The Early Years 1967-1972. Also scheduled for November 11th release, Cre/ation features 27 tracks culled from the larger box set, 19 of ‘em previously unreleased, offering fans a budget-priced ($16 on Amazon as I type...) way to experience the tasty rare tracks, BBC performances, and live recordings included in the massive Floyd The Early Years box set.

Hidden in the fine print of Sony’s press release for this box set it says “each individual book-style package will be released separately early in 2017,” save for a bonus disc exclusive to the box, so we fans may be able to buy “ala carte” from the Pink Floyd menu early next year. And can a 40-disc “later years 1973-1995” box set be far behind? Buy your flavor of Floyd via the Amazon.com links below...

I won the lottery, give me the full Pink Floyd experience: The Early Years 1967-1972 box set