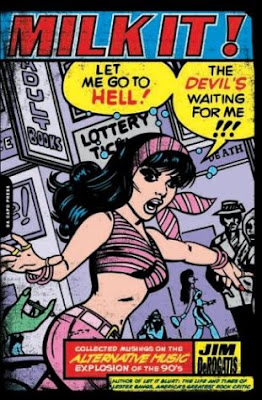 The Reverend is an old-school rock critic, weaned on dog-eared copies of Creem and Crawdaddy, influenced by first generation critics like Lester Bangs and Dave Marsh and mentored by their contemporaries, folks like Rick Johnson and John Kordosh. It's no secret that I find many of today's so-called "music journalists" to be either corporate-supported whores or pathetic would-be hipsters who dismiss an album's merit merely because of its label pedigree. I read a lot of music magazines, but find very little good writing about music.

Seldom, however, have I been let down by Jim DeRogatis, former Jersey Beat zine contributor and music critic for the Chicago Sun-Times. Over the course of his illustrious career, DeRogatis has developed an original voice and a distinctive form of criticism that echoes that of his influences. From his perch in the middle of Chicago's often overlooked rock music scene, DeRogatis spent the decade of the '90s observing and writing about the rise and fall of the "alternative" rock scene. Like any good critic, Dero's feuds are the stuff of legend and his critical darts are usually perfectly aimed and well deserved.

Milk It! offers nearly 400 pages of DeRogatis' ruminations on rock 'n' roll from the freewheeling decade of the '90s, the book collecting columns, interviews, and reviews from different publications and providing, perhaps, the most insightful and comprehensive history of the decade's music that will be written. DeRogatis was right in the middle of it all, writing about and interviewing the era's biggest alt-rock stars; artists like Kurt Cobain, Courtney Love, and Billy Corgan. Although DeRogatis is seldom as caustic in his criticism as other writers, his insight and honesty cuts to the bone, earning him criticism of his own from antagonists like Corgan, producer Steve Albini, and Sonic Youth's Thurston Moore, among others.

The chapters in Milk It! are appropriately divided by theme or artist, including individual sections on Nirvana, Hole, Pearl Jam, and Smashing Pumpkins. A chapter titled "Positively Bleeding" looks back at Chicago's local rock scene, including Albini, the sensational Liz Phair, and the overlooked Urge Overkill while "It Was A Riot, Girls" tackles the "girl power" movement, covering artists as diverse as Phair, Sinead O'Connor, Tori Amos, Bjork, and P.J. Harvey. Other chapters speak of a wide range of artists, from Patti Smith, R.E.M. and U2 to Weezer, Pere Ubu, and the Jesus Lizard. An entire section is dedicated to Britain's adventuresome Creation Records label and bands like Ride, My Bloody Valentine, and the Stone Roses while another section covers "hypes" and "frauds" like Jon Spencer and Marilyn Manson.

Some of the best work in Milk It! is also the most controversial, including the savage Hootie & the Blowfish review that got DeRogatis fired from Rolling Stone magazine. The book offers a brutal indictment of the Lollapalooza Nation, a bird's eye view of Woodstock '94, and a dismissal of the Rock & Roll Hall Of Fame that should give anybody second thoughts about visiting the institution. Pieces on cult bands like Wire and the Flaming Lips are particularly interesting and provide important counterpoint to the coverage of more commercial artists in the book.

Milk It! captures the best and the worst of the decade of the '90s, the wit and intelligence that DeRogatis brings to his writing complimenting the critic's passion for and immense knowledge of rock 'n' roll. With little fanfare and only a modicum of recognition – Chicago, after all, is considered a literary slum by many NYC and LA based tastemakers – Jim DeRogatis has advanced the state of rock criticism and made a strong argument for his inclusion among the giants of the genre. Consistently entertaining and always thought provoking, DeRogatis is shown at his best in the pages of Milk It!. (Da Capo Press, published October 2, 2003)