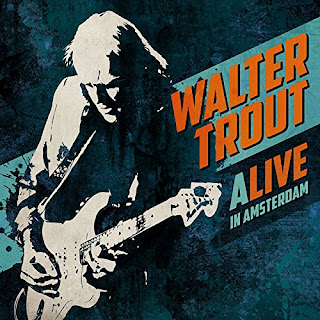 Touring in support of his recently-released live album ALIVE In Amsterdam, blues-rock guitarist Walter Trout – one of the Rev’s personal favorites – has announced that he’ll be hitting the road in August for a number of North American performances. Trout’s tour opens on August 13th with an appearance at the Cincinnati Blues Festival and will close in Denver, Colorado on August 30th, 2016 at the Oriental Theater. After a brief romp across Europe, Trout will return to the states for a slate of December shows that are as of yet unannounced.

Trout’s ALIVE In Amsterdam is a red-hot collection of performances recorded in November 2015 in Amsterdam’s Royal Theatre Carré. ALIVE In Amsterdam has been released as both a two-CD set and a three-album set pressed in glorious 180gr black vinyl. In a press release for the album, Trout states “we were rocking. If people are expecting a laid-back show, that's not what they’ll get. This is potent stuff.  That whole tour was kinda triumphant for me. Just to be back, after what I went through. But also to be playing with a renewed energy and commitment.”

With songs pulled from every era of his five-decade career, ALIVE In Amsterdam includes the Luther Allison cover “I'm Back,” the plaintive B.B. King tribute “Say Goodbye To The Blues,” the harmony-bolstered rocker “Almost Gone” and the raucous “Tomorrow Seems So Far Away” from Trout’s Battle Scars album and much more. Check out the video for ALIVE In Amsterdam below and then get ready to catch Trout perform live when he comes to your hometown!