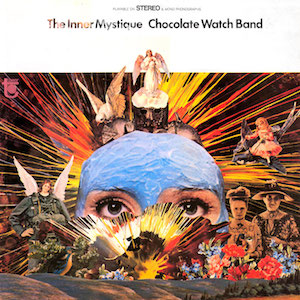 Although the Chocolate Watch Band’s 1967 debut album No Way Out suffered from excessive studio tinkering by producer Ed Cobb, their sophomore effort – 1968’s effervescent The Inner Mystique – was mostly created out of the ether in the studio by engineer Richard Podolor. The band itself had literally imploded in mid-’67, guitarist Mark Loomis leaving first to pursue his drug-fueled dreams of creating psychedelic-folk music with the Tingle Guild, which featured original Watch Band vocalist Danny Phay.

Drummer Gary Andrijasevich would follow Loomis out the door, with singer Dave Aguilar right behind him, leaving guitarist Sean Tolby and bassist Bill Flores as the remaining members. The pair recruited new bandmates to fulfill live bookings but, by the end of 1967, the band was essentially dead in the water. That didn’t stop Ed Cobb and Richard Podolor, though, neither of whom wanted to leave money on the table; they literally pieced together The Inner Mystique from whatever odds ‘n’ ends they found in the studio, creating the rest, branding it “Chocolate Watch Band” and slipping it past an unsophisticated, pre-Internet audience that didn’t know any better.


The first side of The Inner Mystique – three of the album’s meager eight-song tracklist – was entirely Podolor’s show. Using un-credited studio pros, along with singer Don Bennett, whose unremarkable vocals had been shoehorned into the grooves of No Way Out without the band’s knowledge or approval, Podolor approximates the R&B-drenched psychedelic roots of the Chocolate Watch Band with mixed results. The album-opening “Voyage of the Trieste,” credited to producer Cobb, is a swirling, raga-touched psychedelic instrumental that stirs a bit of jazz-rock fusion into the grooves…not entirely uninviting, but it has nothing to do with the band whatsoever. The same goes for the Cobb-approved five-minute psych jam “Inner Mystique,” which offers up some inspired playing, just not by any real Chocolate Watch Band members, and almost a year too late to catch the initial wave of psychedelic rock fervor.

The stand-out of side one is a torrid cover of “In the Past,” originally by fellow garage-rock pioneers We The People. Although Bennett’s vocals are soft-pedaled in favor of the song’s jangly instrumentation, the result is pleasant enough and would have been a solid single release at the time. Side two, however, offers up some prized authentic Watch Band treasures, most notably in the band’s wired cover of Ray Davies’ “I’m Not Like Everybody Else.” With Aguilar’s snarling vocals right up front with Loomis’s taut fretwork, and with the rhythm section providing a big beat backdrop, the song’s defiant edge stands among the best performances of the era.

The album-closing “I Ain’t No Miracle Worker” showcases the band’s immense talents, Aguilar coming on strong like an American Eric Burdon on a slow-burning, R&B-seared mid-tempo rocker with sneering, emotional vocals matched by some elegant, Spanish-flavored Loomis fretwork and a solid rock ‘n’ roll soundtrack with large drumbeats and heavy bass lines. Two studio outtakes – the soulful “Medication” and “Let’s Go, Let’s Go, Let’s Go” – offer Bennett’s vocals overdubbed atop Aguilar’s voice. As for the former, we should begrudgingly offer Bennett his due for not fudging up the basic vocal track and delivering as strong a performance as he ever would under the Watch Band name. He was helped, no doubt, by the spiky, punkish guitar lines provided the song by Loomis, as well as a rolling rhythm track.

The less said of “Let’s Go, Let’s Go, Let’s Go” the better…Bennett’s hoarse, charmless vocals are thankfully hidden low in the mix while the band slogs away lazily behind him. The listener is never sure whether this is supposed to be a traditional blues song, with Otis Spann-styled piano in the background, a big beat R&B rave-up, or a rockabilly romp, and it fails on every level. Better is the band’s cover of Bob Dylan’s “It’s All Over Now Baby Blue,” a former B-side that seems to include vocals by both Aguilar (appropriately Memo From Turner period Jagger) and Bennett (eh) riding atop a busy psychedelic swirl of instruments that reminds of Flowers era Rolling Stones.


Although neither the Chocolate Watch Band’s No Way Out or The Inner Mystique sold in remarkable quantities, and were anything but representative of the band’s high-voltage live sound, the two albums would continue to increase interest in the band. In late 1968, the Chocolate Watch Band would reform with the first recorded line-up mostly intact, Aguilar replaced by Phay, and with original Watch Band guitarist Ned Torney brought back into the fold after his stint with the Army. This version, now known as the ‘Chocolate Watchband’, would record 1969’s One Step Beyond, eschewing their earlier Stones-inspired R&B vibe for a more mellow folk-rock sound similar to Moby Grape or the Charlatans. Still, it represented the most original Watchband music caught on tape, even if the band had evolved beyond recognition, and by 1970 even this version of the band was done.

Still, Chocolate Watch Band’s reputation as flamethrower live performers, along with reissues of their first two albums, would find a new audience in the post-Nuggets and Pebbles ‘80s, influencing a new generation of throwback garage-rockers like the Lyres, the Chesterfield Kings, and others, while original vinyl copies of No Way Out and The Inner Mystique would trade on the collectors’ market for premium prices. As a result, several band members, including singer Aguilar, second line-up replacement guitarist Tim Abbott, and the rhythm section of bassist Bill Flores and drummer Gary Andrijasevich would reunite in the late 1990s and begin playing again.

This re-formed Chocolate Watchband recorded a live collection of their original material, At the Love-In Live! in 1999, followed by an all-new album of mostly Aguilar originals titled Get Away in 2000. They would continue touring well into the 2000s, and in 2010 the band re-recorded a number of songs from the first three albums, releasing it as Greatest Hits, the Chocolate Watchband story coming full circle and providing a happy ending to a saga that began in 1965…

Buy the vinyl LP from Amazon.com:
The Chocolate Watch Band’s The Inner Mystique
Posted by Rev. Keith A. Gordon at Sunday, March 25, 2018

"No Way Out" was a jam song that features David Aguilar on vocals...The band wrote this song spontaneously in the studio - you can hear David singing as he walks up to the microphone. Later - Ed Cobb took credit for the song...