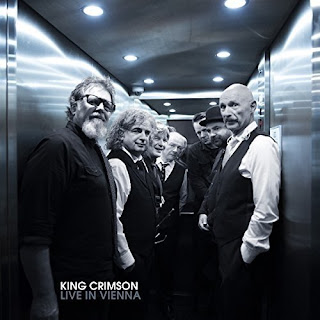 Those fearsome road warriors King Crimson seldom perform any song the same way twice; neither are their nightly performances as cut-and-dried in structure as many performers. This free-wheeling approach to their music has not only made them an in-demand touring band but it has also created a collecting frenzy for their frequently-released live albums. Crimson may not be the Grateful Dead of the 21st century, but they’re offering a similar fan-friendly experience for loyal fans of their unique and complex music.

On April 6th, 2018 King Crimson will release Live In Vienna, December 1st, 2016, a three-disc box set that captures that night’s electrifying live performance. Mixed from the original multi-track tapes, the first two discs of the box provide listeners with the complete first and second sets from the concert. Disc three includes “a series of soundscapes edited into newly sequenced pieces” featuring band members Robert Fripp, Tony Levin, and Mel Collins, according to the press release for the album. The third disc also features the Vienna show encore as well as the first live performance of the song “Fracture” since 1974. The set is presented in a fold-out digifile package with 16-page booklet featuring tour photos and notes by writer David Singleton, all of it packaged in a slipcase.

Disc One
First Set: Vienna 2016
1. Walk On: Soundscapes: Monk Morph Music Of The Chamber
2. Hell Hounds of Krim
3. Pictures of a City
4. Dawn Song (Suitable Grounds for the Blues)
5. VROOOM
6. The Construkction of Light
7. The Court of the Crimson King
8. The Letters
9. Sailors’ Tale
10. Interlude
11. Radical Action II
12. Level V