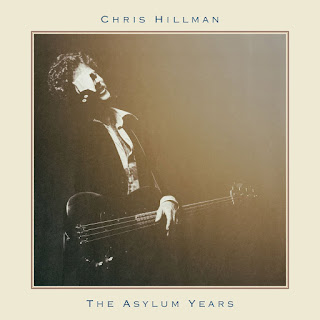 One of the original members of legendary ‘60s band the Byrds, Chris Hillman’s post-band career took a lot more twists and turns than his Byrdsian colleagues. After recording a half-dozen classic albums and touring the world with the band circa 1965-68, Hillman followed Gram Parsons out the door after the release of the ground-breaking Sweetheart of the Rodeo album. Not satisfied with (arguably) inventing the country-rock genre with the aforementioned classic LP, Hillman and Parsons formed the Flying Burrito Brothers, which took rock ‘n’ roll further into the woods with albums like 1969’s The Gilded Palace of Sin and 1970’s Burrito Deluxe. Leaving the Burritos behind after 1971’s self-titled swansong LP, Hillman did a short stint with Stephen Stills’ Manassas (recording two albums with the band).

With a little prompting from Asylum Records’ David Geffen, Hillman formed the Souther-Hillman-Furay Band, a sort of country-rock “supergroup,” with Poco’s Richie Furay and singer/songwriter John David “J.D.” Souther. That band’s two recordings yielding a modest hit in 1974 with “Fallin’ In Love,” from their self-titled debut disc, but tensions among the three major players broke the band up shortly after the release of their aptly-named sophomore effort, 1975’s Trouble In Paradise. In between the Burritos and S/H/F, Hillman snuck away for a brief (and short-lived) Byrds reunion that resulted in a self-titled 1973 album that proved to be the band’s swansong (and wasn’t nearly as bad as reviews at the time would have you believe).


Hillman launched his solo career with the 1976 release of Slippin’ Away. It was a move the singer, songwriter, and multi-instrumentalist talent should have taken after the Burrito Brothers jumped the tracks five years earlier. Better late than never, perhaps, and after cranking out a brace of original songs – the lead-off track co-written with Crawdaddy magazine editor Peter Knobler – Hillman gathered up friends and session pros like guitarists Steve Cropper (Booker T & the M.G.’s) and Bernie Leadon (another Burritos alum), pedal steel maestro Al Perkins, and drummers Jim Gordon and Joe LaLa, among several others, to record Slippin’ Away.

You won’t hear much of the Byrds in Slippin’ Away, but that’s not necessarily a bad thing – Hillman’s contributions to his legendary former band are solid and indisputable – but with this first shot at a solo career, Hillman walked down the California “avocado rock” * pathway blazed by singer/songwriters like Jackson Browne, James Taylor, and Joni Mitchell. In many ways, Slippin’ Away reminds me of Jay Ferguson’s solo work after leaving Spirit, folk-infused lite rock with the rough edges smoothed away. The album-opening “Step On Out” evinces an island vibe with exotic rhythms and Hillman’s spry acoustic strum while the lush “Falling Again” hides its country twang beneath an undeniable melody and thick instrumentation.

The Hillman original “Take It On The Run” sounds like an obscure Eagles album outtake, a SoCal-flavored blend of country roots and rock rhythms with tasty slide-guitar courtesy of Donnie Dacus, a Texas guitarist who would later play with all four members of Crosby, Stills, Nash & Young before eventually joining Chicago. Hillman covers former bandmate Stephen Still’s “Witching Hour” with reckless aplomb, capturing the song’s haunting soundscape with some nice 12-string licks by Hillman, Dacus’s slide guitar, and Albhy Galuten’s atmospheric synth flourishes. Hillman’s “Midnight Again” is, perhaps, the best tune on Slippin’ Away, the singer allowing his county side to blossom with twangy abandon, assisted by the fatback sound of Perkins’ and Croppers’ snaky guitar licks.


Slippin’ Away didn’t set the woods on fire, commercially, but Asylum believed in its artist and put him back in the studio to record a second album, Clear Sailin’. The label used fewer high-priced session pros in the studio the second time around, instead forming a de facto band around Hillman that included guitarists John Brennen and Richard Marx (yes, that Richard Marx), bassist Larry Sims, keyboardist/steel guitarist Skip Edwards, and drummer Merel Bregante. The assembled musicians acquit themselves well on a spirited collection of laid-back “avocado rock” that carries on the sound of the debut album, with Crawdaddy’s Knobler on board to help co-write a handful of songs. The album-opening “Nothing Gets Through” evinces a similar rhythmic tropical island vibe as the lead-off on Slippin’ Away, but with spicier guitar licks, Alan Garth’s trilling recorder, and a more up-tempo musical arrangement.

Hillman’s original “Fallen Favorite” is a lovely mid-tempo ballad that features one of the singer’s best vocal performances, lush instrumentation peppered with weepy pedal steel guitar, and insightful romance-gone-wrong lyrics. Given the state of FM radio in ’77, it could have been a hit single. Instead Asylum released the trite Carole Bayer Sager tune “Heartbreaker” as the album’s lone 45rpm representative; Hillman does his best with the saccharine lyrics and messy arrangement, but the man’s no miracle worker. Much better is “Hot Dusty Roads,” a country-flavored up-tempo mid-rocker with more colorful and imaginative lyrics and a charming soundtrack.

After the failure of “Heartbreaker” to break onto the charts, Asylum went backwards to the debut album and released “Slippin’ Away” as Hillman’s second 1977 single. For a label that basically defined the Cali-bred “avocado rock” sound with artists like Jackson Browne, Linda Ronstadt, Joni Mitchell, and the Eagles, Asylum sure as hell didn’t know what to do with Chris Hillman. Aside from “Hot Dusty Roads,” Hillman’s original “Playing the Fool,” a spry mid-tempo heartbreaker, or Hillman’s loving cover of Smoky Robinson’s “Ain’t That Peculiar,” which he infuses with an odd but effective sort of country soul and funky rhythm (fueled by Garth’s blazing saxwork), would have made for great plays on AM or FM radio at the time. The album’s title track is equally charming, with mesmerizing instrumentation and gentle vocal harmonies that could have made it a “yacht rock” classic.


Archive specialists Omnivore Recordings have reissued Slippin’ Away and Clear Sailin’ for the first time, presented together on a single CD with no bonus tracks under the title The Asylum Years. Liner notes by writer Scott Schinder include fresh quotes from Hillman, who looks back fondly on the creation of his first two solo albums as a “growing process.” After Clear Sailin’ barely slipped onto the charts, Hillman put his solo career on hold for five years to reunite with former Byrds members Roger McGuinn and Gene Clark as McGuinn, Clark & Hillman. The trio recorded a pair of albums before Hillman returned to his solo work and albums like Morning Sky (1982) and Desert Rose (1984).

In the mid-‘80s, Hillman formed the Desert Rose Band, a modestly successful country band that ran from 1985 through 1994 and reunited in 2008, the singer/songwriter only sporadically returning to his solo career, most recently with the Tom Petty-produced, critically acclaimed 2017 album Bidin’ My Time. But if Slippin’ Away and Clear Sailin’ represent the first tentative steps of Chris Hillman as band leader and primary songwriter, they were also solid stand-alone albums that display a different side of Hillman’s talents, and a welcome addition to the artist’s canon of work that stretches from 1965 and the Byrds’ Mr. Tambourine Man to Bidin’ My Time (and, hopefully, beyond...). Grade: B+ (Omnivore Recordings, released February 9, 2018)

* Thanx to fellow scribe Martin Popoff who, for all I know, coined the “avocado rock” term that I’ve used here...

Buy the CD from Amazon.com: Chris Hillman’s The Asylum Years
Posted by Rev. Keith A. Gordon at Monday, March 05, 2018