British rock legends Wishbone Ash will be hitting the pavement in the U.S. next month as part of their seemingly endless “Open Road Tour.” The band is preparing to celebrate its 50th anniversary next year, and although the last new Wishbone Ash album, Blue Horizon, was released in 2014 they’ve recently had a pair of their 1980s-era albums – 1982’s Twin Barrels Burning and 1985’s Raw To the Bone – reissued by Cherry Red Records.

To go along with their April tour dates, Madfish Records is releasing Wishbone Ash: The Vintage Years 1970-1991, a monster limited edition 30-disc career-spanning box set comprised of sixteen studio albums, three original live albums (on six discs), and eight previously-unreleased live performances dating from 1973 to 1980. Three of the band’s studio recordings (1987’s Nouveau Calls, 1989’s Here to Hear, and 1991’s Strange Affair), which were originally released by I.R.S. Records, are currently out-of-print and commanding collectors’ prices. All the music in the box set has been remastered from the original multitrack and ¼” tapes and the box includes a 156-page hardcover book written by Classic Rock zine’s Dave Ling, a 36-page poster book, photos, and scads of other band memorabilia.

As for the U.S. tour, the band will be performing in many venues that they haven’t visited in years, especially in the South and Southwest. Wishbone Ash logs roughly 30,000 miles on the road annually, their touring ethic and pioneering twin-guitar hard rock sound the key to their continued popularity as a live band. “The band basically lives together year-round on the road, so we have a very strong level of communication that translates in our performances and recordings,” says frontman Andy Powell in a press release for the tour. “We’ve come to an era where the industry has to pigeonhole a band as ‘Classic Rock’, ‘Prog Rock’, ‘Heritage Rock’ and so on. The truth is that we have always kept our options open and always relied on the musicianship of the players to lead the way. It’s fun to be stylistically diverse and this has, in its way, contributed to our longevity.”

April tour dates are listed below; be sure to make plans to catch Wishbone Ash when they come to your hometown! 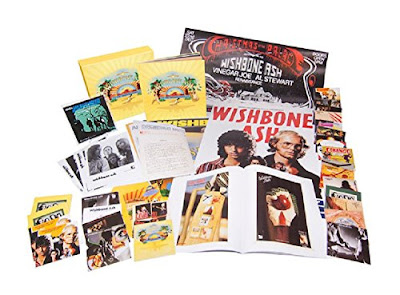