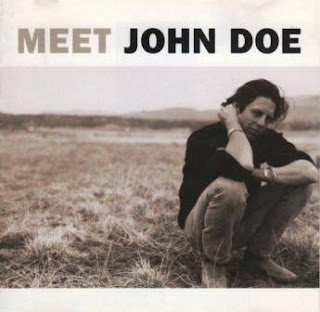 As bass player for X, the now infamous early ‘80s Los Angeles punk band, John Doe was something of a trendsetter. With a fast ‘n’ furious guitar-oriented rock style and decadence-tinged lyrics courtesy of Mr. Doe and X vocalist and then Mrs. Doe, Exene Cervenka, X was a stylistic precursor not only for many of the hardcore bands that would follow, but for many of today’s college market “alternative” bands as well.

An unusual dichotomy existed, though. Doe and X, for all their lyrical erudition and undeniable punk attitude and fury, drew not only on influences as obvious as the Doors, Lou Reed, and the Velvet Underground but upon other, less ‘hip’ artists as the Bobby Fuller Four, Chuck Berry, and Gene Vincent, as well as elements of country and folk music. Although derivative musically, the fresh twist which X put on an old sound – as well as their intelligent lyrics, often inspired or affected by the tension in the Doe/Cervenka relationship – won the band a growing audience and critical acclaim, if not wide-spread acceptance, until their self-destruction.

Which brings us to Meet John Doe, Doe’s pseudonymous solo debut; the results are pleasantly unexpected. Drawing upon an obvious wealth of knowledge of American musical styles, Doe has assembled a top-notch collection of songs which incorporate decades of progress in rock ‘n’ roll, blues, county, and even folk music. It’s a delicate balancing act, though Doe pulls it off, rocking furiously on one tune, waxing poetic on the next.