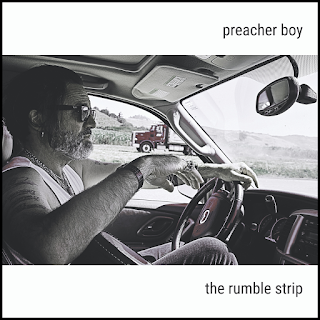 Christopher Watkins, a/k/a ‘Preacher Boy’, has been kicking around the American blues scene for a couple decades, cranking out his original style of acoustic blues across a handful of critically-acclaimed albums. Inspired by country-blues legends like Bukka White, Son House, and Mississippi John Hurt, Watkins developed his own distinctive vocal and guitar style and launched Preacher Boy & the Natural Blues in the early 1990s. He recorded a couple albums for the esteemed Blind Pig Records label and released a couple more independently before disappearing from the blues world.

After a short hiatus from music, Preacher Boy came roaring back in 2016 with three new albums filled with inspired original songs and inspired classic blues covers. The albums all feature Watkins’ sandpaper-soaked-in-whiskey vocals and mesmerizing slide-guitar played on a vintage National Resophonic guitar. The trio of recordings wasn’t so much a commercial endeavor as an artistic one, Watkins shaking off the ‘ring rust’ and getting his blues mojo back in the wake of his absence. The Rumble Strip is his follow-up to 2016, a more commercially-oriented effort that nevertheless displays an amazing amount of artistry and musical sophistication. Simply put, Preacher Boy’s performances on The Rumble Strip leave nothing but scorched earth in their wake.


“The Sliding Window (Hail Mary)” reminds of R.L. Burnside’s 1990s-era electro-blues with its low-slung instrumental groove, Watkins’ vocals a cross between a guttural Tom Waits barroom brogue and Mississippi Hill Country patois. The album’s rockin’ title track is part field-holler and part street-corner talkin’ with percussive percussion, scraps of razor-sharp guitar, and an unrelenting vocal delivery that roars out of your speakers like a bootlegger speeding away from the revenuers. The devastating “Bullet” marries the poetic lyricism of Bob Dylan with Son House’s fatalism, the song’s ornate underlying instrumentation doing little to soften the crushing body-blows and uppercuts delivered by Watkins’ explosive heavyweight-class vocals and harrowing socially-conscious lyrics. I’ve been listening to rock and blues music for almost 50 years and I’ve never heard a more haunting, desperate, anguished story-song.

Watkins’ “Bandy-Legged and Broke” returns to the same cutting-edge blues sound that Jon Spencer brought to Burnside’s A Ass Pocket of Whiskey. The song crackles with energy, with vocals shouted above a deep background groove to jarring effect. The yearning vocals of “Saint Peter” are out of character for Preacher Boy, but quite effective here, Watkins displaying a more soulful facet of his talents on a song that buzzes with distortion, emotion, and raw immediacy. The syncopated rhythms of “Crazy Dirty James” are matched with similar vocal gymnastics with clashing instrumentation adding punctuation to Watkins’ lyrics. Preacher Boy’s familiar National Resophonic can be heard fighting to rise above the din, grounding an otherwise chaotic performance in the murky mud of the Mississippi Delta. The muscular “Can’t Sleep Here Tonight” is a Led Zeppelin-styled blues-rocker pumped up on steroids, threatening to blow out your speakers with a sonic tsunami while “Showers of Rain” ups the ante with exotic instrumentation clamoring behind Watkins’ colorful (autobiographical?) lyrics and world-weary vocals.


Although The Rumble Strip showcases a welcome expansion of his musical palette beyond his signature country-blues sound, Watkins’ vocals on these songs still growl and bite like Howlin’ Wolf chewing on a microphone, swallowing electricity and spitting out lightning bolts. It’s with his lyrical skills where Preacher Boy really shines, though, and The Rumble Strip is full of whip-smart story-songs backed by imaginative and often-dense instrumentation that proves that Preacher Boy is no one-trick pony. Recommended for rock and blues-rock fans alike, The Rumble Strip marks the return of a unique and original musical voice. Grade: A

Buy the CD from Amazon.com: Preacher Boy’s The Rumble Strip