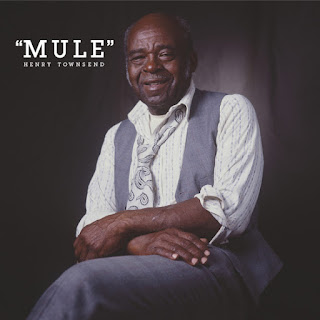 Legendary bluesman Henry Jesse James “Mule” Townsend was born in Mississippi in 1909 and grew up in Cairo, Illinois before making his way to St. Louis as a teenager out on his own. Townsend recorded his first sides for Columbia Records in 1929 and enjoyed a lengthy career as both a solo artist (under a number of names) and as a sideman playing on a wealth of classic recordings by artists like Big Joe Williams, Roosevelt Sykes, Sonny Boy Williamson, and Robert Nighthawk, among many others. Along the way, he also recorded his own performances for a number of labels including Paramount Records and Victor/Bluebird.

Never the most prolific of blues artists, Townsend had recorded only a couple of full-length albums for labels like Prestige Bluesville in the 1960s and Adelphi Records in the ‘70s before recoding the album Mule for the St. Louis-based Nighthawk Records. At the time, Nighthawk was making the turn from a blues-oriented label towards reggae with releases by Jamaican artists like the Gladiators, Junior Byles, and others. Townsend’s critically-acclaimed Mule was one of the label’s last blues albums, but it was a good one that has sadly been out-of-print for over a decade.

On December 14, 2018 Omnivore Recordings will reissue Henry Townsend’s Mule as part of their restoration of the Nighthawk Records catalog. The reissue CD includes the original tracks along with eight previously-unreleased songs from the album sessions. Mule also includes updated liner notes and photos from original co-producer and Nighthawk label founder Leroy Dodie Pierson. The CD was remastered from the original master tapes by Grammy® Award-winning engineer Michael Graves.

The original liner notes for Mule show that the label was firmly behind the bluesman and his new album, stating “the production of this record was undertaken with two goals in mind: to create, finally, an album worth of Henry Townsend’s unique genius, and thus secure for him the recognition that an artist of his stature and historical importance deserves. We at Nighthawk have become convinced that Henry is perhaps the greatest living country bluesman.”

Henry Townsend died in 2006 at the ripe old age of 96 years old with a lifetime of great music to his name. He was awarded a posthumous Grammy® Award in 2008 for “Best Traditional Blues Album” for Last of the Great Mississippi Delta Bluesman: Live In Dallas. Released by the Blue Shoe Project, the album featured performances by legends like Townsend, ‘Pinetop’ Perkins, Robert Lockwood, Jr. and ‘Honeyboy’ Edwards. After years lingering in obscurity, it will be good to have Mule back in print again.