CD Preview: Cold War Kids’ This Will All Blow Over In Time 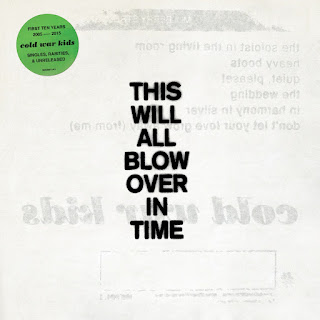 They began as a sort of blues-infused soul-punk band in the early 2000s and gradually outgrew their more punkish tendencies to become a reliably-rocking and commercially viable band, a rarity these days as rock ‘n’ roll is pushed aside stateside by the major labels in favor of the more mainstream (and better selling) pop and hip-hop genres. As shown by their 2017 release L.A. Divine, Cold War Kids continue to mature as musicians and creators as they close in on their 15th anniversary as a band.

As a treat for their fans, Cold War Kids has collected together all of their singles releases circa 2005 to 2015 along with a bunch of previously-unreleased and rare tracks for an ‘odds ‘n’ sods’ set titled This Will All Blow Over In Time. Scheduled for December 7th, 2018 release by Downtown Records/UMe, the collection will be available as a two-CD set and digital download; a translucent yellow vinyl double-LP version of the collection will be released in February 2019.

This Will All Blow Over In Time features 23 tracks overall, with the first disc – titled “Singles Worked At Radio” – leading off with their first single, 2006’s “Hang Me Up To Dry,” and including the radio hits “We Used To Vacation” and “Hospital Beds,” along with nine more of the band’s single releases from their first five albums. The second disc of the set, jokingly titled “Songs From All Over the Place,” offers eleven unreleased tunes including a cover of Nick Cave’s “Opium Tea” and songs previously only released on iTunes like “Goodnight Tennessee” and “Minimum Mistake.” The set also includes a pair of songs from the band’s long out-of-print debut EP, 2005’s Mulberry Street, with “In Harmony In Silver” and “Quiet Please.” Check out the complete track list for This Will All Blow Over In Time below.

Buy the CD from Amazon.com: Cold War Kids’ This Will All Blow Over In Time

This Will All Blow Over In Time track listing: