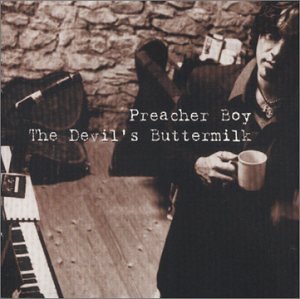 Christopher Watkins, a/k/a “Preacher Boy,” was a teenaged blues obsessive who discovered his muse in the country-blues sounds of acoustic bluesmen like Son House, Bukka White, and Mississippi John Hurt. After honing his craft playing guitar with a number of go-nowhere rock bands, Watkins embraced his alter ego and formed Preacher Boy & the Natural Blues in 1992. The band quickly made a name for itself on the thriving San Francisco Bay area blues scene that included talents like Tommy Castro and Elvin Bishop, and the band released its self-titled debut album on the esteemed Blind Pig Records label in 1995.

Preacher Boy & the Natural Blues opened up for artists like Los Lobos, Counting Crows, and J.J. Cale when they performed in the Bay area, and they wowed the audience of the 1995 San Francisco Blues Festival. The band released its sophomore effort, Gutters & Pews, on Blind Pig in 1996, the album incorporating a more Americana vibe centered on Watkins’ multi-instrumental talents (guitar, mandolin, banjo, accordion, keyboards, washboard, etc.). Moving to the U.K. in the late ‘90s, Preacher Boy released the 1998 solo album Crow. An opening performance for Eagle-Eye Cherry led to a songwriting partnership between the two artists, Watkins subsequently co-writing and playing on five tracks for Cherry’s 2001 release Living In the Present Future.


In the meantime, Preacher Boy wrote and recorded The Devil’s Buttermilk with keyboardist Steve Pigott and drummer Paul Burgess, the album released in 1999. This is where the Reverend picked up on Preacher Boy’s unique blues sound, writing for All Music Guide that “the listener is assured that The Devil’s Buttermilk is not your typical blues album and that Preacher Boy is definitely not your usual Telecaster-toting modern bluesman. With a guttural black-cat moan to match any death-metal howler, Preacher Boy sermonizes at the altar of hard knocks, reading from the good book of Muddy Waters and spreading the gospel of Howlin’ Wolf.”

I concluded my review of that album stating that “Watkins crosses the traditional country-blues of haunted legends like Robert Johnson and Son House with a modern, rock-influenced perspective similar to Jon Spencer or Jack White of the White Stripes, branding the sound with his own distinctive mark.” Sadly, Watkins and his Preacher Boy persona all but disappeared after the 2004 release of Demanding To Be Next, about which All Music Guide’s Stewart Mason wrote “Preacher Boy might be a young white boy singing the blues, but think Tom Waits and Captain Beefheart more than Led Zeppelin and Bad Company, and throw in some Townes Van Zandt and Gillian Welch as well.” 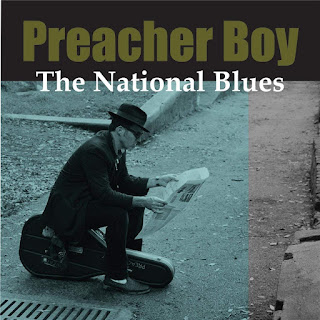 This wouldn’t be a ‘Lost & Found’ column without some resolution for the artist, though, and Watkins reached out to the Reverend on Facebook to let me know that contrary to the rumors that Preacher Boy was dead and gone he was, in reality, alive and thriving. After a short hiatus from music, Preacher Boy came roaring back strong in 2016 with three new albums filled with inspired original songs and choice classic blues covers. Released by Coast Road Records, the albums all feature Preacher Boy’s gruff vocals and the ringing sound of his slide-guitar playing on his vintage National Resophonic guitar.

The National Blues was the first of Preacher Boy’s three 2016 releases. According to Watkins’ website, the album was recorded in a shed in the mountains high above Santa Cruz, California. The performance is about as organic as one can get – no edits, no overdubs, and no freakin’ Auto Tune – just Watkins’ voice and guitar and drummer Zack Olsen. The result is a stunning collection of acoustic country-blues. The album-opening “Obituary Writer Blues” reminds of Son House, Watkins’ deft fretwork creating a mesmerizing vibe while his whiskey-soaked vocals conjure up the ghosts of the Mississippi Delta.

The spry “My Car Walks On Water” displays elements of the Piedmont style of blues, mostly due to Watkins’ jaunty git licks, while the haunting “Seven’s In the Middle, Son” is a Charley Patton styled blues dirge with wailing vox and dark-hued guitar lines. A pair of bonus tracks round out a ‘baker’s dozen’ of rock-solid ‘alternative blues,’ Watkins’ “Evil Blues” a deceptively engaging song, his strained vocals a cross between Tom Waits and Randy Newman as the song’s fascinating lyrics leaving you hanging on every word. A languid cover of the chestnut “Baby, Please Don’t Go” captures all the angst of the original by framing it in a different musical setting, Preacher Boy putting his own ‘stank’ on the song with an imaginative reading. 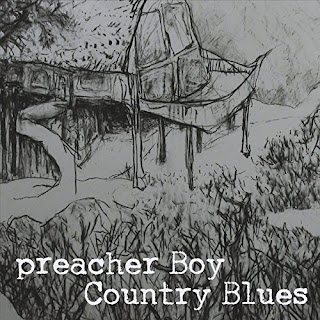 The aptly-titled Country Blues followed The National Blues, the album’s cover featuring a B&W drawing by visual artist Amy Marinelli titled “Home” which depicts the rustic setting in which the album was created. Musically, Country Blues offers a similar sort of blues buffet as The National Blues, Preacher Boy reaching back to his roots to deliver eight scorching covers of songs by country-blues legends. The album was recorded ‘live’ without overdubs over the course of two nights on location at was once the old Meadowood Lodge, tucked away and virtually hidden among the redwood trees in the Santa Cruz mountains. Country Blues was released on November 12th in celebration of Bukka White’s birthday.

With his gravelly voice accompanied only by his National Resonator guitar, Watkins uses his interpretive skills to spin unique takes on songs like Delta blues giant Robert Johnson’s “If I Had Possession Over Judgement Day,” which pairs Watkins’ imaginative fretwork with a unique arrangement that makes full use of a light/dark dynamic. Others artists receiving the Preacher Boy treatment include Bukka White, whose “Fixin’ To Die Blues” is provided a rowdy, upbeat performance while the traditional “Stagolee” – a classic song about which you could write a book or academic theses about – is delivered as a jaunty Piedmont-styled jam. Blind Willie Johnson’s “Jesus, Make Up My Dyin’ Bed” features some nimble pickin’ on what is a truly unique and exhilarating reading of the classic blues dirge. 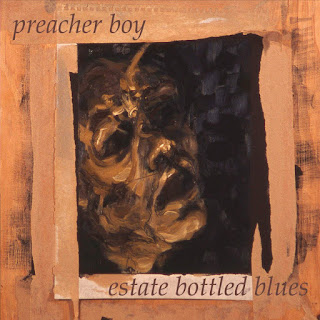 Estate Bottled Blues rounds out this trilogy and represents the “long lost” Preacher Boy album. Pursuing an exercise in personal creativity, the songs on the album began with Watkins’ promise to write and record a song every day until his muse was exhausted. It ended 42 songs later in a Chicago hospital (a story for another time), the songs forgotten in an old box until Watkins’ rediscovered ‘em and remastered the material for Estate Bottled Blues. Offering 16 of those lost songs, Estate Bottled Blues is Preacher Boy’s most fully-realized album yet, the multi-instrumental talent layering electric and acoustic guitars, keyboards, mandolins, banjos and such onto an eight-track tape machine.

Preacher Boy pursues a different tack with his singing here as well, softening his sandpaper vocal chords with a gentler delivery befitting the lush instrumentation of the tracks. He also adds a bit of Southern Gothic vibe to the lyrics and arrangements, mixing the lyrical sensitivity of a folk artist to his normal gutbucket acoustic blues. It’s an artistically-successful collection, ranging from the Tom Waits-styled barroom blues of “Envelope” and the more rock-oriented “Revelation Falls” to the lyrically-powerful “The Fine and the Weak” – which features some of Watkins’ hardest-edged fretwork to date – and the eloquent “Pulling Black Flowers From An Hourglass,” where Watkins’ gets his most oblique, lyrically. Estate Bottled Blues is Preacher Boy’s “rock” album, the songs full of passion and energy.


So, as one can tell from the previous 1,000+ words, Christopher Watkins/Preacher Boy wasn’t exactly ‘lost’ though he definitely is ready to be ‘found’ by a legion of blues fans in search of authenticity and sincerity in their music. Although his country-blues influences are evident in these grooves, Preacher Boy’s sound is entirely of his own making, and he’s been busy making vibrant and electrifying music that stands outside of the mainstream of the insular and tradition-bound world of the blues. In this, he reminds a lot of an artist like Corey Harris.

Preacher Boy wrote, recorded, and released three high-quality albums within a year, without succumbing to exhaustion or cliché. Nevertheless, I suspect that Preacher Boy still has some interesting music to make...

I had the honour of promoting Preacher Boy in the Northeast (England) around 95/96. Excellent to work with and very special sound which is their own. Hopefully bump into Preacher Boy again one day.