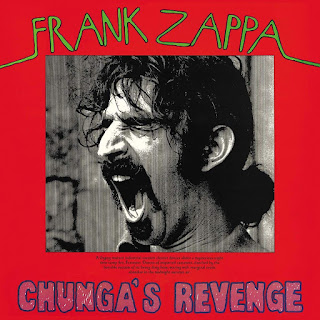 Rock legend Frank Zappa, a/k/a ‘The Maestro’, was quite a busy little beaver during the year spanning (roughly) late 1969 to late 1970. He broke up his longtime band the Mothers of Invention due to the cost of paying nine musicians full-time wages in the face of dwindling record sales. He wiggled out of his MGM Records contract, allegedly tired of the label’s interference with his music, and he subsequently talked Warner Brothers into setting up his own boutique imprint, Bizarre Records, run by his manager Herb Cohen, which would also release albums by artistic eccentrics like Captain Beefheart and Wild Man Fischer.

Working with former Mothers band member Ian Underwood and musical guests like Don “Sugarcane” Harris, Jean-Luc Ponty, Lowell George, and Shuggie Otis, Zappa recorded and released his second solo album, Hot Rats and then, in early 1970, released a pair of Mothers’ albums – Burnt Weeny Sandwich and Weasels Ripped My Flesh – that were “frankensteined” together using previously-recorded material by the original band. To top off the year, Zappa put together a new version of the Mothers dubbed simply “The Mothers” (which itself would soon be dropped, with new music issued solely under Zappa’s name).


The revised version of the Mothers featured Zappa’s old pal, multi-instrumentalist Underwood, along with guitarist/bassist Jeff Simmons, keyboardist George Duke, journeyman British drummer Aynsley Dunbar, and three former members of 1960s-era hitmakers the Turtles – bassist Jim Pons and singers Mark Volman and Howard Kaylan (i.e. “The Phlorescent Leech & Eddie” or, simply, “Flo & Eddie”). This is pretty much the line-up that went into the studio to record what would become Zappa’s third solo album (and second in a year’s time), Chunga’s Revenge. Released in October 1970, Chunga’s Revenge closed out a madcap year for ‘The Maestro’ that included four albums of new material, the early creative stirrings of his 200 Motels film project, and the formation of the new band.

Under supervision by the Zappa Family Trust, Universal Music has reissued Chunga’s Revenge on shiny, thick 180-gram audiophile vinyl, cut directly from the original analog master tapes. The album has been unavailable on vinyl for better than 30 years, last appearing on wax in 1986 as part of Zappa’s rare and long out-of-print Old Masters, Box Two set released on his own independent Barking Pumpkin label. The reissue LP features the original album artwork and is packaged in a gatefold outer sleeve and swanky, plastic-lined inner sleeve for maximum vinyl protection. It sounds as good as ever, and the luxurious vinyl captures all of the album’s sonic nuances.


As he was wont to do, Zappa changed musical directions again with this third solo album, eschewing both the social satire of early Mothers of Invention albums and (mostly) the jazz-rock fusion of Hot Rats (tho’ he’d further explore the possibilities of the fusion style a couple years later with the Waka/Jawaka and The Grand Wazoo albums). Really, Chunga’s Revenge is all over the board, musically, and if it served as ‘ground zero’ for Zappa’s growing fascination with sex and groupies, it also showcases Zappa’s mastery of a wide range of musical styles. Zappa had originally conceived of Chunga’s Revenge as a precursor to the story of his upcoming film, and while it was widely criticized at the time of its release, it has since found some acclaim in that context. Zappa’s “sex and groupie” phase would last throughout 1971 and the release of the live LP Fillmore East – June 1971 and the 200 Motels movie and soundtrack album, after which Frank would return to making “serious music.”

Chunga’s Revenge kicks off with some good, old-fashioned six-string pyrotechnics, the lengthy instrumental jam “Transylvania Boogie” putting the guitarist through his paces with a firecracker performance that skews towards the proggier end of jazz-rock fusion. Zappa bends and twists his notes into a pretzel-like apparition throughout the track while Underwood’s keyboards and Dunbar’s busy drum fills round out the sound. By the end of the song, Zappa has begun channeling some ghost of the Delta blues into his playing, and a human named Max Bennett lays down some funky fine bass lines. Bennett was evidently a jazz bassist of some renown, and an in-demand session guy who had previously played on Hot Rats as well as albums by the Monkees and the Partridge Family before being enlisted into Zappa’s studio corps.

Tell Me You Love Me


Zappa further hones his blues chops on the devastating fretwork that frames the story-song “Road Ladies,” which lyrically delves into the travails of a rock ‘n’ roll band on the road and the availability of, well “road ladies.” Flo & Eddie make their first appearance with Zappa here on backing vocals, and jazz legend George Duke provides some tasty keyboard accompaniment alongside Zappa’s flamethrower licks. The short “Twenty Small Cigars” is a holdover from the Hot Rats sessions and hews to a similar musical template. Zappa’s subtle guitarwork is subdued here in support of the overall performance, which is dominated by Zappa’s use of a harpsichord to create a lounge-like ambience, a point further emphasized by Underwood’s jazzy piano playing.

The three-part suite “The Nancy & Mary Music” is a nine-minute live track that offers Zappa’s imaginative guitar noodling set against a solid rhythmic backdrop provided by bassist Jeff Simmons and drummer Dunbar. The song meanders a bit, featuring an obligatory drum solo (it was the ‘70s, after all), before morphing into a scorching, chaotic rocker that spotlights Duke’s eclectic keyboard notes and syncopated percussion before devolving into a jazzy jam that includes scat-vocals by Flo & Eddie. Side two of Chunga’s Revenge cranks the amps from the first note, “Tell Me You Love Me” as hard-hitting a rock song as Zappa ever delivered, with Flo & Eddie front and center in the mix with a soulful vocal performance that slides right in under Zappa’s greasy, fatback fretwork and Dunbar’s driving, explosive percussion.


“Would You Go All The Way?” is a longtime personal favorite, a callback to Zappa’s beloved doo-wop of the sorts featured on 1968’s Cruising with Ruben & the Jets album. Flo & Eddie deliver some swinging harmony vocals with a few gymnastics as Zappa changes time signatures mid-song to take advantage of his talented rhythm section (Simmons and Dunbar) and Underwood’s electric piano. The song quickly moves on from its opening doo-wop flavor to become an oddball pop tune complete with a George Duke trombone solo. The title track is another extended instrumental jam that makes good use of the talents involved, Zappa pushing the musicians out of their comfort zones, with Underwood playing an electric alto sax through a wah-wah pedal and violinist Sugarcane Harris tasked with providing keyboards; both men acquit themselves nicely.

The minute-and-a-half long “The Clap” is an intriguing mini-instrumental that features Zappa creating in a percussive performance, playing drums, wood blocks, tom-toms, and such before the song jumps headfirst into “Rudy Wants To Buy You A Drink,” a throwback to the Absolutely Free era Mothers. A melodic and lyric-heavy satirical song that, musically, careens from one extreme to another like a runaway pinball – offering shades of doo-wop, ‘60s pop, and lounge jazz – Flo & Eddie’s hilarious vocal delivery effortlessly slots into the song’s instrumental arrangement. The lusty “Sharleena” closes out Chunga’s Revenge, the song a R&B tinged soul ballad that makes good use of twin keyboardists Underwood (piano) and Duke (organ) to create a sultry atmosphere beneath Zappa’s vocals and Flo & Eddie’s backing harmony. Zappa’s guitar spits out some funky notes that sit adjacent to Shuggie Otis while Duke’s wiggy keyboard fills add an interesting texture to the performance.


If the preceding Zappa/Mothers albums – Burnt Weeny Sandwich and Weasels Ripped My Flesh – served as an artistic catharsis necessary for Zappa to move on from his original vision for the Mothers and towards “phase two,” Chunga’s Revenge reveals his pure joy in playing with a new and, arguably, more highly-skilled cast of musicians. The addition of two talented vocalists in Volman and Kaylan to the band added a new dimension to the musical possibilities, and if they were largely wasted over the following couple of years on needlessly juvenile material (although “Billy the Mountain” is still a hoot), they also largely freed Zappa from the microphone and allowed him to develop the innovative and influential guitar style that is a large part of his enduring legacy.

Chunga’s Revenge is the result of that aforementioned artistic catharsis, Zappa opening the decade of the ‘70s with a solid roadmap of musical ideas that he would go on to exploit extensively with a prolific slate of recordings that would enjoy both critical and commercial success. Chunga’s Revenge found Zappa exploring various musical avenues, after which he would deliver enduring works like Over-Nite Sensation and Apostrophe(’), which were his two most commercially-successful LPs, both earning Gold™ Record status, as well as fan favorites like Roxy & Elsewhere and Bongo Fury, a collaboration with Captain Beefheart. Chunga’s Revenge represented the dawn of a new era and the beginning of Zappa’s “solo career” in earnest. Grade: B+ (Zappa Records released July 20, 2018)

Also on That Devil Music:
The Mothers of Invention - Burnt Weeny Sandwich LP review
Posted by Rev. Keith A. Gordon at Sunday, August 05, 2018