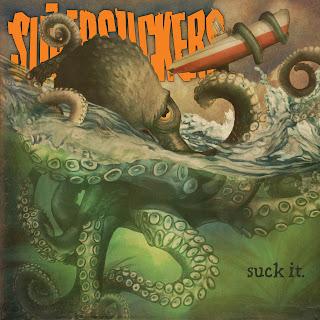 The Supersuckers celebrate three decades in the trenches this year, and to celebrate the infamous Seattle-based band is releasing a new album and launching a lengthy support tour to bring the music to their legion of loyal fans. On September 21st, 2018 Acetate Records will release Suck It, the Supersuckers’ 12th studio album.

“We’ve finally become the band that we’ve always threatened to be,” states the band’s longtime singer and bassist Eddie Spaghetti in a press release for the new album. Fronting a raucous power trio that includes guitarist Marty Chandler and drummer Chris Von Streicher, Suck It was recorded in a mere four days at Bismeaux Studio in Austin, Texas. “And it sounds great," says Eddie, “there’s not a lick I wish we could have back.”

Originally formed in Tucson, Arizona in 1988 as the Black Supersuckers, the band moved to Seattle in 1990, dropped the ‘Black’ from their name, and recorded singles for a number of regional labels including eMpTy and Sympathy For the Record Industry before they signed with the indie Sub Pop Records label. The Supersuckers would become the legendary grunge imprint’s only country-flavored shit-kickin’ outfit, releasing their debut LP, the Jack Endino-produced The Smoke of Hell, in 1992.

They would release a total of four albums on the Sub Pop label before departing for the middle-major label Koch Records for their The Evil Powers of Rock ‘n’ Roll album in 1999. Interestingly, the Supersuckers were one of the few Seattle-area bands of the early-to-mid ‘90s that didn’t record for a major label (they were signed by Interscope Records and dropped before releasing an album), and after the lone LP for Koch, they formed their own label, Mid-Fi Recordings, to release their next couple of albums. After a lengthy hiatus following their 2008 album Get It Together, the Supersuckers returned in 2014 with Get the Hell for Acetate Records.

The Supersuckers are described by writer Steve Huey of All Music Guide as “kicking out a gleefully trashy brand of throttling, rockabilly-flavored garage punk. Their lyrics were a raucous, over-the-top celebration of all the attendant evils of rock & roll – sex, booze, drugs, Satan, and whatever other vices the band could think of, all glorified with tongue planted firmly in cheek.” While the album flirts with the band’s country-leanings on a couple of songs, Suck It mostly features the band’s rowdy, punkish, guitar-driven rock sound. The Supersuckers’ 30th anniversary tour spans much of the U.S. so check out the list of tour dates below and be sure to check out this trailer-park tornado of a band when they come roaring through a town near you!

Buy the CD from Amazon.com: The Supersuckers’ Suck It