Peter Holsapple & Alex Chilton and the “Death of Rock” 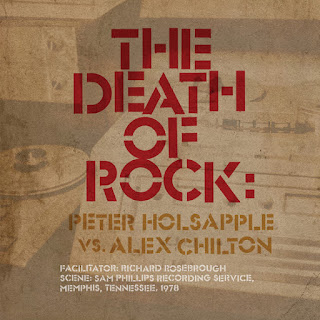 They’re two of the most iconic rockers in the power-firmament – the late Alex Chilton, who blazed the trail via his pioneering work with the Box Tops and cult rockers Big Star, and Peter Holsapple, who picked up the torch dropped by Big Star and ran with it over the course of a half-dozen albums by his revered band the dB’s.

For one shining moment in 1978, however, the two rock ‘n’ roll stars collided and worked together at the legendary Sam Phillips Recording Service in Memphis, Tennessee. The resulting recordings were thought forever lost to the ages until their recent rediscovery; on October 12th, 2018 Omnivore Recordings will release The Death of Rock: Peter Holsapple vs. Alex Chilton on CD, some 40 years after the duo’s original sessions.

The story, as it turns out, happened thusly – three years before hooking up with the dB’s, Holsapple ventured from his North Carolina home in 1978 to the Bluff City, hoping to record with Big Star’s Chris Bell as his producer. After Bell rebuffed the singer/songwriter Holsapple hooked up with Big Star family member Richard Rosebrough, a musician and studio engineer, and the two began recording tracks during the studio’s off hours.

Meanwhile, Chilton was busy working on what would become his Like Flies On Sherbert album at the studio and hearing what Holsapple was working on said to Peter “I heard some of that stuff you’re working on with Richard...and it really sucks,” promising to drop by the studio and show the neophyte power-popper “how it’s done.” As Holsapple recalls, “I caught Alex exiting a world of sweet pop that I was only just trying to enter, and the door hit me on the way in, I guess.” 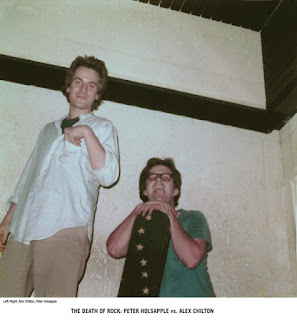 The results of the two men’s collaboration have been lost until now, and Omnivore’s first-time release of these sessions features extensive liner notes from Memphis author, filmmaker, and music historian Robert Gordon (no relation). The Death of Rock also includes previously-unseen photos from the personal collection of Holsapple and Memphis music documentarian Pat Rainer. The new album was produced by Omnivore’s award-winning Cheryl Pawelski and mastered by Mike Graves at Osiris Studio and Jeff Powell at Take Out Vinyl/Sam Phillips Recording Service, which appropriately brings the project full-circle.

In his liner notes for The Death of Rock, Gordon sums the recordings up thusly: “Holsapple and Chilton have a bang-up meet up. It works out OK for both artists, the collaboration taking each somewhere they’d likely not have gone by themselves. In some collisions, the results are Reese’s Peanut Butter Cups. In others, the ambulance has to haul people to the hospital. Here, no blood was spilled, but each artist finds himself in a place pretty much unlike any other visited on his own.” You can check out the full track listing for The Death of Rock below.

The Death of Rock tracklist:

Peter Holsapple
1. Bad Reputation
2. House Is Not A Home
3. We Were Happy There
4. The Death of Rock
5. Take Me Back
6. Mind Your Manners (backing track)

Buy the CD from Amazon.com: The Death of Rock: Peter Holsapple vs. Alex Chilton