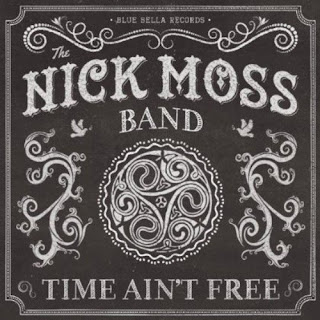 It’s been nearly 13 years now since guitarist Nick Moss released his debut album, 2001’s Got A New Plan, and better than two decades since he first broke onto the scene as the bass player for bluesmen Buddy Scott and, later, Jimmy Dawkins. After all this time, Nick’s fans have become somewhat complacent, expecting the same high-octane Chicago blues performances that Moss has become known for on every album release, maybe with a little blues-rock influences thrown in for good measure as they were on his recent Here I Am (2011) and Privileged (2010) albums. After all this time, too many expect too little from the ever-surprising Mr. Moss.

Credited to the Nick Moss Band, Time Ain’t Free was crowdfunded through the Indiegogo website. This was Nick’s first surprise – although the album is released under Moss’s independent Blue Bella Records label, a big chunk of the money to finish up the recording, packaging, and publicity was supplied by the guitarist’s hardcore fan base (yours truly included). It proves to be a good investment, Time Ain’t Free the hottest, most satisfying slab o’ blues and blues-rock that Moss has released to date. Crowdfunding is the future for indie artists, allowing them to connect with the fan directly and allowing them the freedom to make the music they want without interference from a label or, in Moss’s case, with the financial freedom to push yourself in the studio and make something truly special.


The other big surprise with Time Ain’t Free is the addition of singer and guitarist Michael Ledbetter, a descendent of folk-blues giant Huddie “Leadbelly” Ledbetter. Moss has always had a keen eye for talent, whether in choosing the fine musicians he had as his former band the Flip Tops, or those talents he used on his two previous solo albums. With Ledbetter, though, he’s found a massive talent to not only handle nearly half the vocals (thus freeing Moss to concentrate on guitar), but also to share in the songwriting. The wisdom in this choice is glaringly apparent with Ledbetter’s first turn at the microphone, the shuffling, greasy blues tune “Light It Up.” An original, mid-tempo Chicago blues-styled romp, Ledbetter does an incredible job of dancing atop the song’s spry rhythms with his warm, lively vocals. Moss’s funky guitar strains play nicely off Bryan Rogers’ piano, creating an electric track that is going to translate well to a live setting.

But first Moss ignites Time Ain’t Free with a pair of solid performances in “She Wants It” and “Was I Ever Heard.” The former offers up a Southern rock ‘n’ soul styled groove with slippery fretwork, honky-tonk piano, and a slinky rhythm while the latter throws some greasy guitar into the bucket above a choogling, locomotive rhythm, Moss’s vocals underplayed in favor of the unrelenting, driving beat and subtle, circular guitarplay reminiscent of R.L. Burnside’s Mississippi Hill Country drone. Ledbetter jumps back into the fray with “Fare Thee Well,” a smooth-as-silk urban blues tune with smoldering vocals and frayed emotion pouring out of every one of Moss’s guitar licks. Ledbetter’s incredible vocal turn here reminds of Bobby “Blue” Bland, every inflection hitting a soulful high while Moss lays down a tearjerker solo.


The album’s title track is a monster blues-rocker with muscular fretwork and a fluid groove, drummer Patrick Seals really shining with an explosive performance. Moss’s vocals are a bit slight here, but his guitar sings loud and clear with imaginative, fleet-fingered solos. “Been Gone So Long” is cut from a similar cloth, with a bit of Canned Heat-styled boogie-blues flavor rolling low and slow in the background as Moss roars out the lyrics above Rogers’ chiming keys, the guitarist slicing and dicing the arrangement with a switchblade solo as deadly as a knife’s edge which not-so-subtly punctuates the song’s heartbreak lyrics. The gospel-tinged “I Want The World To Know” offers a stark contrast, making the best use of Ledbetter’s soulful voice on a tradition-clad, old-school romantic blues ballad.

It’s a true measure of a band in how well they handle a cover of a blues standard like Moss and crew do here on Son House’s classic “Death Letter Blues.” The band amps up the Delta blues tune with soaring guitars and raucous, chaotic instrumentation that brings the 90-year-old song into the 21st century with a bang. Moss’s subtle but strong vocals might pay homage to the great Delta legend’s original, but his stinging six-string and Rogers’ furious keyboards are more reminiscent of late 1960s British blues-rock bands like Cream or Free. The mesmerizing throwback tune “Walkin’ On A Ledge” blends Isaac Hayes with Curtis Mayfield, Ledbetter’s excellent vocals supported by backing singers and an infectious groove that wouldn’t have seemed out of place in the Stax Records studio circa 1971. Time Ain’t Free closes with “(Big Mike’s) Sweet Potato Pie,” a rowdy instrumental with a definite 1970s era vibe that features lightning-fast keyboard runs, a rock steady beat, and shards of slaphappy guitar and bass.


With his tenth studio album, bluesman Nick Moss proves that he still has a few tricks up his sleeve. Time Ain’t Free is his bluesiest studio recording in years, and potentially his most acclaimed, the guitarist downplaying his classic rock tendencies in favor of a carefully-achieved balance of blues, rock, and soul music that flows out of your speakers like honey from the hive. The addition of Ledbetter on vocals provides a creative new facet to the band, while Moss continues to expand and experiment with his sonic palette, bringing a myriad of fresh flavors to his guitar playing and exploring new directions with his songwriting. Consider Time Ain’t Free as another winner from one of blues music’s most innovative talents and exciting live performers. (Blue Bella Records, released March 18, 2014)