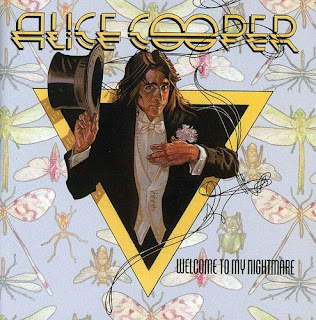 When Alice Cooper, the band, broke up in the mid-‘70s due to the rigors of stardom (insert imagination here), many thought that Alice Cooper, the man, was history. Alice was, after all, an honest-to-god freakshow, the controversial artist behind such future classics as “School’s Out,” “Billion Dollar Babies,” and “I’m Eighteen.” Without the backing of strong musicians such as Michael Bruce and Glen Buxton, cried the critics and other observers, Cooper was on his way to becoming nothing more than an interesting footnote in the checkered history of rock ‘n’ roll.

The 1975 release of Alice’s solo debut, Welcome To My Nightmare, proved the critics wrong and provided Cooper with some degree of vindication. With the benefit of hindsight, we critical types now consider Cooper to be one of the legends of rock ‘n’ roll, a heavy metal godfather who has influenced artists such as Marilyn Manson and Rob Zombie, among many others. Back in ’75, though, teenage whiz kids such as myself couldn’t have cared less about the ruminations of a bunch of erudite college grads slumming in the ghetto of rock criticism. Alice Freakin’ Cooper had a new album out and for hundreds of thousands of high school stoners, rockers, and underachievers, that was good enough for us!

Conceived by Cooper as a concept album (which tied in with the effects-laden stage show and wildly successful tour that accompanied Welcome To My Nightmare), the album both blazed new trails and also revisited classic Cooper-styled songs. It introduced Cooper the ‘crooner’, yielding a monster hit in the ballad “Only Woman Bleed” that won the artist a new distaff audience and opened the door for power ballads by contemporaries like Ozzie and a slew of ‘80s hair bands. Welcome To My Nightmare also further defined horror rock with monster cuts like the title track, “The Black Widow” (complete with children’s choir) and “Cold Ethyl,” with narration provided by the crown price of terror, Vincent Price. “Department of Youth” was a stylistic throwback to Cooper’s previous band sound, with Detroit rocker Johnny “Bee” Badanjek delivering a solid drumbeat behind Cooper’s vocals. To replace the muscular sound of his long-standing band, Cooper recruited Lou Reed’s rock ‘n’ roll animals, guitarists Dick Wagner and Steve Hunter, who stacked up fiery riffs like so much sawmill fodder throughout the songs on Welcome To My Nightmare.

The remastered Rhino reissue of Welcome To My Nightmare brings new brilliance to the sound of this classic album and adds previously unreleased live versions of “Devil’s Food,” “Cold Ethyl,” and “The Awakening” culled from an ABC television special. Manic liner notes from Cooper biographer Jeffrey Morgan and a handful of rare photos round out an exceptional package. Although I personally would like to have seen Rhino begin their restoration of the Alice Cooper catalog with early albums like Love It To Death or Killer, the work that they’ve done with Welcome To My Nightmare and, previously, Billion Dollar Babies, is nevertheless impressive. If your knowledge of Alice Cooper is limited to his early band work or more recent metal horror albums, you owe it to yourself to check out Welcome To My Nightmare. (Rhino Records)

Buy the CD from Amazon.com: Alice Cooper's Welcome To My Nightmare
Posted by Rev. Keith A. Gordon at Friday, May 03, 2019