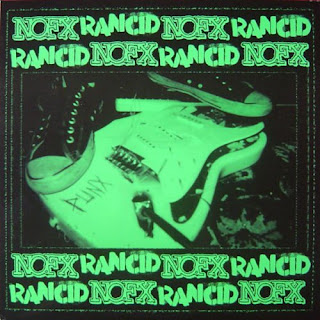 The idea of the “split” disc certainly isn’t a new one – I remember seeing “battle of the bands” styled albums that pitted the Beatles against some lightweight pretenders like the Four Seasons in the bins some thirty years ago. Punk has picked up the tradition with mixed results, tho’ I wouldn’t trade my Rudiments/Jack Kevorkian’s Suicide Machines split CD for anything less than a C-note. BYO Records has made an art form out of what is essentially a commercial marketing ploy, matching dissimilar bands together on a single disc to great effect. This NoFX/Rancid pairing is the third in the series, with each band delivering covers of five of the other band’s tunes, and let me say that it kicks ass in more ways than I can recount here…

Although both NoFX and Rancid are part of a California punk rock tradition, the resemblance ends with their geographic proximity. Influenced by bands like Black Flag and the Circle Jerks, NoFX have always followed a sort of tongue-in-cheek, smutty juvenile hardcore aesthetic, which in turn has been watered down and exploited by such bubblegum punk poseurs as Blink-182. From their ska-punk roots in Operation Ivy to their current status as indie-rock royalty, Rancid has always been a group of died-in-the-wool Clash acolytes.

The dissimilarity in the styles of the two bands is what makes this split disc work, however. NoFX nail Rancid’s Clash fixation with manic readings of tunes like “Olympia WA” and “Tenderloin,” Fat Mike, El Jefe and the boys waxing Rasta with a reggae-tinged take on “Radio.” For their part, Rancid mix things up a bit and crank up the volume, sounding like nothing so much as a bunch of drunken frat boys. “Moron Brothers” is a frenetic musical leap-of-faith while covers of “Stickin’ In My Eye” and “Bob” roar from 0 to 100 mph with high-octane sound and seemingly endless energy. The disc closes with “Vanilla Sex,” a brilliant anti-censorship screed that Rancid infuses with new spirit and perspective. Altogether, the ten tracks offered here will have you bouncing off the walls like some sort of gleeful punk rock dervish. (BYO Records, released March 5, 2002)