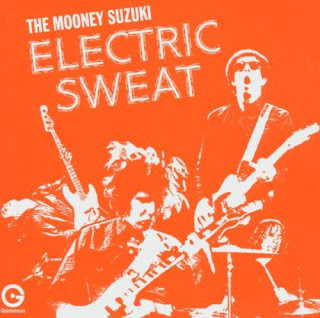 There have been many artists and bands that have genuflected before the altar of Detroit rock ‘n’ roll, but among the many acolytes infected with the “Motor City Madness,” few have delivered the goods with the intensity and integrity of the Mooney Suzuki. While the critical establishment wets its collective short pants over the Strokes (this humble scribe included), across town the Mooney Suzuki is breathing fire and shooting thunderbolts from their instruments with the best impersonation of a sixties-era garage band that you’re likely to hear circa 2002.

Electric Sweat, the New York City foursome’s dynamic sophomore effort, continues the high-voltage overkill established by their year 2000 debut People Get Ready. With axes set on stun, Sammy James Jr., John Paul Ribas, Graham Tyler and Will Rockwell channel the ghosts of the MC5, the Yardbirds, Iggy, and countless other grunge masters in songs like the anthemic “In A Young Man’s Mind” or the Farfisa-drenched R&B rave-up “It’s Showtime, Pt II.” James’ vocals evoke memories of Rob Tyner while Tyler’s careless dedication to craft makes his six-string weapon of destruction roar and wail like metal clashing against metal. Feedback seeps into every corner of these songs, rock ‘n’ roll lightning dancing across every track on Electric Sweat.

Even the CD booklet brings back memories of smoke-filled nights in Ann Arbor, the photo of the four mopes in the Mooney Suzuki resembling a younger, contemporary Sonic Rendezvous Band. Forget about the Strokes, the White Stripes, the Hives and any other pretender to the throne – the Mooney Suzuki are the real thing, as true to the promise of rock ‘n’ roll  as a stack o’ tattered old copies of Creem magazine. Roll over Beethoven; tell Lester Bangs the news – the Mooney Suzuki are here to rock your world! (Gammon Records, released April 9, 2002)

Buy the CD from Amazon.com: The Mooney Suzuki’s Electric Sweat