Archive Review: Sinéad O’Connor's The Lion and the Cobra (1988) 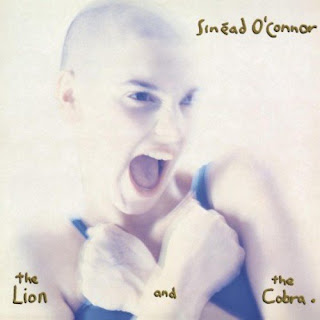 Sinéad O’Connor is a wonderful anomaly. Women in rock music tend to come across as either spandex-clad, sexual cutie-pies or as asexual, sensitive folkie singer/songwriter types. Ms. O’Connor is certainly neither and yet, at times, both. She writes, wrote, or co-wrote every cut on The Lion and the Cobra, plays guitar, and sings exhibiting a great measure of intellectual sensitivity and lyrical acumen.

The material she has created, though, transcends the usual heavy-handed clichés and sparseness of the singer/songwriter genre in that it is complex, disturbing, and fully-realized. On the other side of the coin, O’Connor is aggressively sexual, a highly sensual creature in word and voice despite her unconventional (by social standards of beauty) shaved head and masculine appearance. Thus, the wonder and the anomaly...

The Lion and the Cobra is a delightful and entertaining album, an artistic triumph of form and substance. Incorporating an almost Baroque instrumental approach with her haunting, ethereal vocals, one had to search for the lyrics beneath a poetic, embroidered web of emotion and passion, the mark of O’Connor’s singular and personal vision. Often compared with Kate Bush – another outstanding female artist who travels similar starlit paths – O’Connor, in reality, more favorably compares with Peter Gabriel.

With her great musical ability, willingness to go beyond the boundaries of traditional pop formats, and her talented use of the voice as an instrument in its own right, O’Connor shares with Gabriel an interest in artistic experimentation and the use of instrumentation to stretch and extend the limits of rock music as we know it. The Lion and the Cobra is an album which, at times, is loud and harsh, soft and whispering, dreamlike and disturbing, at once both rhythmic and syncopated, cacophonic and never, never dull. (Chrysalis Records, released November 1987)

Buy the CD from Amazon.com: Sinéad O’Connor’s The Lion and the Cobra