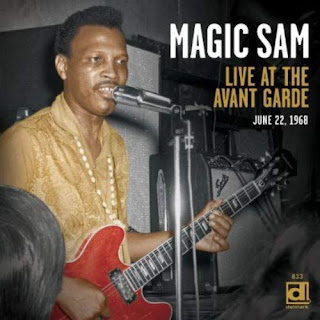 By the mid-1960s, Chicago blues guitarist "Magic" Sam Maghett had been kicking around the Windy City for a decade and a half, trying to kickstart a career that seemed to be buoyed entirely by his dynamic live performances. A series of well-received but under-performing sides released by the Cobra and Chief Records labels between 1957 and 1961 had earned Sam a reputation as a fiery guitarist and soulful vocalist, and while they were influential beyond what their meager sales numbers would indicate, creatively Sam didn't hit his stride until signing with Bob Koester's groundbreaking Delmark Records label.


At the time, Delmark Records was pioneering a new style of blues that not only pushed the staid genre into new territory, but also appealed to a growing audience of young white fans. Records by Junior Wells, J.B. Hutto, and Magic Sam's 1967 debut, West Side Soul, would withstand the test of time to become influential classics of the blues, but in the soul-drenched era, anachronistic guitar men like Maghett had a hard time finding gigs in Chicago. Sam drove north in June 1968 to perform at the Avant Garde in Milwaukee, Wisconsin, the show thankfully captured on tape by high school student and blues fan Jim Charne.

The Magic man kicked off the Avant Garde set with a rip-roaring cover of Freddie King's instrumental classic "San-Ho-Zay" that he'd later record later that year for his sophomore effort Black Magic. As drummer Bob Richey delivers a strong circular beat and bassist "Big Mojo" Robert Elem holds down a fat bottom end, Magic Sam embroiders the progressive rhythms with his electrically-charged fretwork. The notes jump out of the speaker and attack your ears with the subtlety of a swarm of angry bees, but you're overjoyed by the musical honey left behind. The slightly less rambunctious "Don't Want No Woman" is built on a standard Chicago shuffle, raised a notch by Sam's underrated, soulful vocals and imaginative guitarplay.

While the original recording has been re-mastered and cleaned up as much as possible by producer and engineer Charne, there's still plenty of dirt and grease in the grooves, and the shortcomings of the original 45-year-old recording technology are evident on several tracks. It's no worse sounding than standing at the back of a smoke-filled club though, the notes bouncing and colliding off the walls and other listeners. Besides, when you're faced with a performance as stunning as Sam's take on Lowell Fulson's "It's All Your Fault Baby," you're not really going to care. His emotional vocals are paired with a languid backbeat and the song's familiar recurring lick, the guitarist delivering a blues tour-de-force. While his instrument trembles and shakes throughout the take, Sam's anguished solo almost three-minutes into the song is the definition of the blues, perfectly capturing the song's heartbreak with a few well-written lines of poetic guitarplay.


Maghett's original "You Belong To Me" is an upbeat rocker with a jaunty rhythmic soundtrack that relies heavily on Elem's lively bass lines and Sam's machine-gun guitar licks. His vocals pop out of the mix and lyrics are delivered at a frenzied pace as Richey's rapid-fire drumbeats keep moving the clock forwards. It's an exhilarating ride, and highly recommended, but still nowhere near as alluring as Sam's reading of Amos Blakemore's "Come On In This House." Sam's vocals here often ride a rocket into the stratosphere, the singer hitting falsetto notes that seem to amplify his emotional turmoil, his wiry fretwork echoing the tearful vibe, a few well-placed notes delivering tremors the equal of any earthquake.

Magic Sam pays tribute to the great Muddy Waters with a pair of nicely-chosen-and-delivered covers, the first of the Willie Dixon-penned "Hoochie Coochie Man," one of the Chicago blues master's signature songs. With Richey and Elem laying down a martial rhythm, Sam spits out the now-legendary lyrics with a certainty that, while less forceful than Waters, is boastful nonetheless. Sam's guitar licks mimic the original recording, but he slaps some fresh paint on the song with a tense solo that wraps around your ears like barbed-wire and squeezes every bit of braggadocio out of the tale. By contrast, while his cover of Waters' "Still A Fool" retains the Delta dirt of the original, Sam takes it to a while other level, his hypnotizing guitarwork rising above his equally-enchanting vocals to leave the listener gobsmacked by the primal electricity of the performance.

One of Sam's best-known songs, "All Your Love (I Miss Loving)" was actually written by his West Side blues partner Otis Rush, but Maghett takes it and makes it entirely his own with a powerful reading, the song's up-tempo rhythms matched by Sam's exclusive guitar tones and nimble-fingered playing, the blues literally falling from his fingertips and washing over the audience. Sam goes the opposite direction with his original instrumental "Lookin' Good," the guitarist amping up a reckless rockabilly vibe, welding it to a steely blues framework, and subsequently laying down the nastiest, greasiest, most enjoyable finger-pickin' east of the mighty Mississippi before the song just choogles on down the tracks as its infectious locomotive rhythm fades into the background.


As mentioned above, the sound quality of Live At the Avant Garde is a bit dicey, scratchy with a bit of echo and some fuzziness. What a young Jim Charne accomplished with his original tape is amazing nonetheless, his primitive recording technology managing to capture the raw immediacy and electricity of the performance. And it's the music that matters, Magic Sam and his trio reveling in the blues, cranking out a high-energy, hour-plus set that is both intimate and expansive, the guitarist bringing his best to a meager audience in a small club. Live At the Avant Garde perfectly documents the musical growth between Sam's West Side Soul and Black Magic albums, and is a welcome addition to the blues legend's too-small catalog. Highly recommended! (Delmark Records, released November 19, 2013)

Buy the CD from Amazon.com: Magic Sam's Live At the Avant Garde
Posted by Rev. Keith A. Gordon at Friday, April 03, 2020