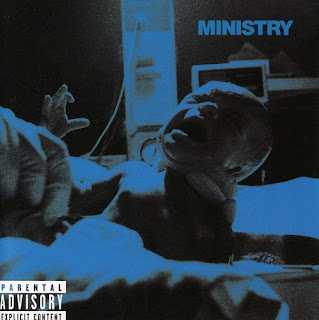 The new generation of metal bands owes an undying debt of gratitude to Ministry. After all, the partnership of Paul Barker and Al Jourgensen pioneered the entire industrial metal genre, mixing extreme showmanship and hard-edged dance rhythms. While the kids in bands like Godsmack, Slipknot, and Sevendust were still in diapers, Ministry’s gruesome twosome were overseeing a musical empire that included a handful of bands (Lead Over Gold, Revolting Cocks, etc) that served as creative alter egos. Ministry has always been their primary outlet, however, and during their halcyon days, 1988-1992, the pair cranked out some loud, obnoxious and wonderfully raucous tuneage, some of which is collected on Greatest Fits.

Ministry has never served up music that is easy to swallow. Their unique recipe of molten riffs, random samples, industrial-strength beats and dark-hued lyrics paired the acid-fueled trances of bands like Throbbing Gristle and Joy Division with the plodding metallic K.O. of Black Sabbath. The result was tracks like “Stigmata” and “N.W.O.,” aggressive musical fever-dreams which used found vocals from folks like George Bush or Adolph Hitler as another instrument in the song’s aural assault.

Greatest Fits ignores the pre-Barker incarnation of Ministry in favor of the manic pairing of talents that began with 1988’s Land of Rape and Honey. It includes a couple of songs from that landmark album, as well as a trio of songs from the platinum-selling Psalm 69, including the chaotic, driving “Jesus Built My Hotrod” with Gibby of the Butthole Surfers. A couple of unreleased tracks are also included, such as a wicked cover of Sabbath’s “Supernaut” and a powerful live version of “So What” from 1994. “What About Us?,” written by Jourgensen for Ministry’s appearance in the movie A.I. jumpstarts Greatest Fits with a megavolt rant and rave.

Their one lone best-selling disc aside, Ministry has always been an underground band, dancing perilously close to the edge while bringing together metalheads, punk rockers, and hardcore dancefloor waifs together under one big tent. Their influence on everybody from Nine Inch Nails and Marilyn Manson to Slipknot is indisputable, if largely uncredited. If you’re a young fan of any of these Ministry adepts, you owe it to yourself to go to the source and check the band for yourself. As an introduction for the uninitiated, Greatest Fits is a great way to become acquainted with the sound and fury that was Ministry. (Warner Brothers, released June 19, 2001)