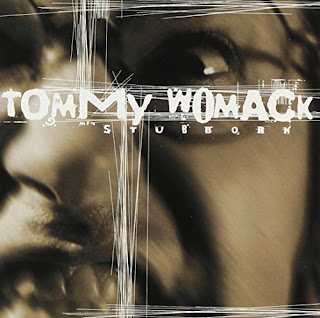 After listening steadily to Tommy Womack’s debut album, Positively Ya-Ya, constantly for over a year I’ve finally figured it out, put my finger on Womack’s place in this great rock ‘n’ roll whatsis. The recent arrival of Stubborn, Womack’s brilliant sophomore effort, reinforces my conclusion: Tommy Womack is the new Harry Nielsen! Now, now, stay with me here – much like that maligned and often-overlooked pop genius, Womack is capable of performing in a number of musical genres, from rock and blues to country and everywhere in between.

Both artists write great songs with slightly skewed lyrical perspectives, and both have a keen eye for skilled sidemen. Whereas Nielsen would enter the studio with various Beatles in tow, Womack records with the cream of Nashville’s underrated rock music scene, talents like Will Kimbrough, George Bradfute, Mike Grimes, Ross Rice, and Brad Jones. Womack may have a more southern-fried perspective than Nielsen, but the parallels are obvious.


Womack’s Stubborn opens with the chaotic “Rubbermaid,” a short stream-of-consciousness rant similar to Captain Beefheart or John Trubee, backed by syncopated drums and flailing harmonica. It jumps from there right into “Up Memphis Blues,” an energetic rocker with a blues edge that includes some tasty slide guitar courtesy of Al Perkins. “Christian Rocker” is a hilarious interlude with fantastic imagery dropped in between songs while “I Don’t Have A Gun” is an angry blues tune featuring appropriately tortured vocals from Womack and some southern rock styled six-string work from Womack and George Bradfute.

“For The Battered,” a song from Womack’s old band and Southeast legends Govt. Cheese, is recycled here as an electric blues with some wicked, dark-hued slide guitar from Will Kimbrough supporting the story. It’s the most powerful musical statement that I’ve heard on domestic violence and I still get chills every time the asshole girlfriend beater’s karma catches up with him. Stubborn’s lone cover is of the Kink’s “Berkeley Mews,” a somewhat obscure Ray Davies gem offered here in a fairly straight-forward rendition that says as much about Womack’s sophisticated musical tastes as it does about his ability to pull the song off on record.


Most critics, when writing of Womack, praise his songwriting abilities, pointing out the numerous characters that live in his songs. They’re really missing Womack’s strongest skill, however – any hack can people their songs with junkies, whores, and ne’er-do-wells of various stripes (listen to any heavy metal lately?). Womack’s strength is in his composition of memorable lines, clever and intelligent lyrical bombs often thrown into the middle of songs to infect the listener’s consciousness days after hearing a song. Witness some of the poetic explosives hidden in the songs on Stubborn: “I’d crawl back in the womb right now if Jesus would show up and point the way.” “Gonna find me a woman who won’t fall apart on the witness stand.” “I want to be a Christian rocker but the devil’s got all the good drummers.” “She was a Presbyterian in a porno picture, tossing her values aside.” “You can all go straight to hell, you’d better cut and run, get on your knees and thank the lord that I don’t have a gun.”

It’s a skill that separates Womack from the mundane “Music Row” factory writers in Nashville even as it marginalizes him from the whitebread world of radio and mainstream music. It also shows his Southern heritage as religious tradition and rock ‘n’ roll yearnings clash for the soul of the songwriter with the resulting imagery creating some of rock’s best rhymes. Among southern rockers, only Jason & the Scorchers’ Jason Ringenburg and, perhaps, Alex Chilton match Womack word for word.


The material and performances on Stubborn sound more confident, Womack’s talents sharply honed by a couple of years of live shows and collaborations with other artists. A gifted storyteller, an amazing songwriter and an energetic performer, Womack is one of Nashville’s best and brightest. Although an indie rocker in style and attitude, Womack’s work deserves the widest audience possible, distribution and promotion that only a major label could provide – if any of the corporate A&R geeks could get their collective heads out of their respective boss’ rear ends long enough to listen. Personally, as long as Womack gets to keep making records like Stubborn, I’ll be happy enough. (Sideburn Records, released February 22, 2000)