Long known as the “devil’s music,” thanks to the legend surrounding bluesman Robert Johnson’s alleged deal with the devil at a Mississippi crossroads, “Old Nob,” as he’s known, has become firmly identified with blues music.

The devil is often just a metaphor used by blues singers to describe a cheatin’ woman, a bad boss, or even the evil in the world, and not a literal being. Still, from his first appearance in Clara Smith’s 1924 song “Done Sold My Soul To the Devil,” the devil persists in the culture of the blues. Let’s take a look at some of the most popular blues songs to evoke the devil’s name.

Brownie McGhee – “Dealing With the Devil” (1941)
Recorded during the Piedmont bluesman’s brief incarnation as “Blind Boy Fuller No. 2,” Brownie McGhee’s “Dealing With the Devil” is a classic tale of love gone wrong. Singing that “my woman don’t love me no more,” McGhee goes on to describe a lover that tries to poison him with “salt in his gravy” and “potash in his tea;” she “has a shotgun in the corner” and a “blackjack on the bed;” and he doesn’t understand why she “goes to bed with an icepick in her hand.” Delivered in Fuller’s traditional ragtime-influenced finger-picked style, McGhee’s spry, almost comedic reading of the song belies its seriousness.   BUY! 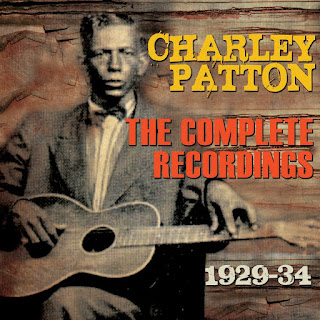 Charley Patton – “Devil Sent the Rain” (1929)
Patton’s “Devil Sent the Rain” is a plain-and-simple song of grief. Although the only remaining recording of this early track is pretty scratchy, as are many old blues 78s from the 1920s, the singer’s feelings are clear despite the ancient recording’s raw sound: his mother has died and he’s going to leave home to wander. Patton sings “Good Lord sent sunshine, devil he sent the rain” in response to his loss, adding “I didn’t know I loved her ‘til they eased her down.”   BUY!

Clutch – “The Devil & Me” (2007)
With an evil blues-metal soundtrack and stunning sandpaper guitars, rockers Clutch delivered one of the most chaotic-sounding songs on the subject with the open flame that is “The Devil & Me.” Turning the Robert Johnson myth on its head, the song speaks of a split between the protagonist and the devil, referring to some shadowy deal with the verse “the devil and me had a falling out, violation of contract beyond a shadow of a doubt.” Singer Neil Fallon doesn’t say exactly what caused the rift between the “best of friends” but the song cleverly name checks Beale Street in Memphis and Skip James’ classic “Killing Floor,” both places where one might run across the Prince of Darkness.   BUY!

Lonnie Johnson – “Devil’s Got the Blues” (1938)
Johnson’s classic song compares the blues to the devil – when one overtakes you, the other can’t be far behind. Johnson sings “the blues is like the devil, it comes on you like a spell, it will leave your heart full of trouble and your poor mind full of hell.” The protagonist is personifying the blues lifestyle, claiming that “the blues will drive you to drink and murder” whether due to heartbreak, poverty, or just good, old-fashioned depression. Johnson’s song includes a fine six-string performance by the influential guitarist.   BUY!

Peetie Wheatstraw – “Devil’s Son-In-Law”
Some time during the 1930s, bluesman William Bunch adopted the name and persona of “Peetie Wheatstraw,” also known as “the Devil’s Son-In-Law” and “the High Sheriff of Hell,” and all but two of his records were released under the Wheatstraw name. Although most historians believe that Bunch took on his diabolic moniker as a marketing ploy – playing up his macho image to sell more records – he penned several songs boasting of his connections to the underworld, including the ethereal “Devil’s Son-In-Law.” A larger-than-life figure that died young (the fate, it seems, of those that fool around with the devil), Bunch/Wheatstraw inspired a character in writer Ralph Ellison’s classic novel Invisible Man.   BUY! 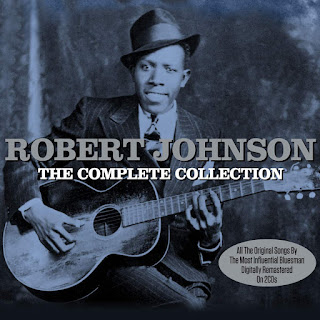 Robert Johnson – “Cross Road Blues” (1936)
The myth behind Robert Johnson’s enormous talent, of course, is that the bluesman met the devil at the crossroads of Highways 61 and 49 in Clarksdale, Mississippi and sold his soul in exchange for his guitar-playing prowess. Oddly enough, Johnson’s “Cross Road Blues” has nothing to do with any late-night bargaining with the devil, its lyrics instead describing the singer’s desperation to get home as darkness is falling. With the lynching of African-America men in the Southern United States not unusual during the 1920s and ‘30s, Johnson’s fears were not entirely unfounded. Regardless, the myth of Johnson’s shadowy midnight tryst has endured. The song available on Johnson’s The Complete Recordings set.   BUY!

Robert Johnson – “Hell Hound On My Trail” (1937)
Recorded during his last RCA studio session in 1937, Johnson’s “Hell Hound On My Trail” sounds terrifying. Over a strummed guitar, Johnson wails a desperate tale of a man trying to escape his fate – whether it’s the devil coming to collect on the Faustian bargain made by the singer, or just the police looking to arrest and jail him. Either way, Johnson maximizes the impact of the song through his use of brilliant poetic imagery and a vocal delivery that borderlines on the edge of desperation.

Robert Johnson – “Me and the Devil Blues” (1937)
The last of the fabled bluesman’s devil-related songs, “Me and the Devil Blues” seems to be a standard-issue blues tune about having trouble with your woman. In this case, the devil might personify the singer’s troublesome lover, or it might be a reference to the artist’s belief that the woman’s love would lead him to the grave…or maybe both. Johnson’s final verse, “you may bury my body down by the highway side, so my old evil spirit can catch that Greyhound bus and ride” touches upon the blues tradition of anonymous roadside internment. 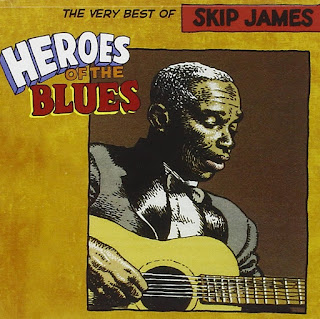 Sam Collins – “Devil In the Lion’s Den” (1927)
This song by obscure bluesman Sam Collins offers one of the earliest references to the devil in blues music. The singer, a “motherless child” (another blues tradition), states “yon’ come the devil, we gonna set this town on fire” before boasting of his personal powers (“I got ways like a devil, sleep in the lion’s den”) before letting his woman know that he’ll be “goin’ up the country” when she asks him to stay. Not unlike modern rap songs with their braggadocio, Collins’ “Devil In The Lion’s Den” may be the first recorded tale of the ramblin’, gamblin’ man.   BUY!

Skip James – “Devil Got My Woman” (1931)
Country bluesman Skip James’ “Devil Got My Woman” is a song of romantic entanglement. James opens the song by singing “I’d rather be the devil, to be that woman man” before blaming the evil one’s influence for his lover’s infidelity, closing the first verse with “was nothin’ but the devil, changed my baby’s mind.” It turns out that the song’s protagonist is not without blame, ‘cause it turns out that the “woman I loved, took her from my best friend,” later adding “but he got lucky, stoled her back again.” Although delivered with James’ typical high wail and accompanied by a haunting guitar track, the song displays an irony usually absent from the bluesman’s repertoire.   BUY!