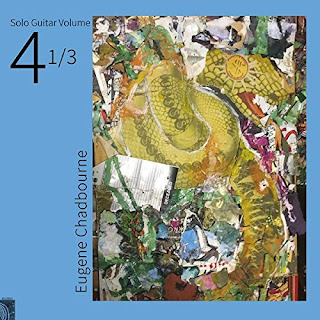 Among the handful of elite underground artists toiling away on the fringes of rock ‘n’ roll, perhaps only the legendary R. Stevie Moore has proven to be more prolific than the master of the “electric rake,” multi-instrumental talent Dr. Eugene Chadbourne. How many records has Chadbourne released over a career that now spans five decades? “I stopped counting them a long time ago,” Eugene told me in a 2019 interview for the Rock and Roll Globe website, “one could probably throw out any number above 200 and basically be right.”

Chadbourne’s Solo Guitar, Volume 4-1/3 is another worthy addition to Chadbourne’s still-growing catalog, which offers music as entertaining, challenging, and eclectic as any artist in rock’s checkered 60+ year history. Released by the Massachusetts-based independent Feeding Tube Records, which specializes in reissues of subterranean music that refuses to fit into the mainstream pop culture straitjacket, this is the fourth and final volume in a series of live recordings made during the late ‘70s when Chadbourne was in exile in Canada as a conscientious objector to the Vietnam War. Each album has been released in a limited edition of 400 vinyl records, and all four albums in the series were “programmed” by the good Doctor himself and each promises a reckless joyride of musical experimentation.

After a few years in Canada spent playing and recording, Chadbourne returned to the states under President Carter’s amnesty program in 1976 and formed seminal 1980s underground rockers Shockabilly (with fellow sonic terrorists Mark Kramer and David Licht). The trio released a handful of now-legendary albums throughout the decade but once Shockabilly drifted apart, Eugene once again focused on his solo career. He would build a loyal cult following across the U.S. and Europe by constantly touring and releasing a metric shit-ton of records, many for dodgy “fly by night” indie labels. Chadbourne also operated his own basement-based mail order label, selling live recordings, all while developing a following among fellow musicians. He would later record with members of the Violent Femmes and Camper Van Beethoven as well as John Zorn, Evan Johns, and the Mothers of Invention’s Jimmy Carl Black (“the Indian in the group”). 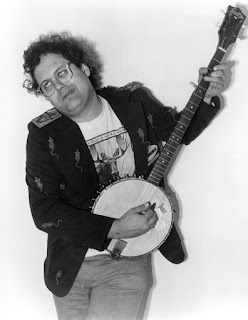 Featuring but four (mostly lengthy) songs, Chadbourne’s Solo Guitar, Volume 4-1/3 is nevertheless the most ambitious of the four albums. Although each performance was primarily recorded on solo guitar, in reality you never know what sort of odd sonic gremlin that Chadbourne is going to yank out of the ether and slap into the grooves. The album-opening “Bow” is somewhat subdued, with Eugene making use of light and dark passages to create an aural ambiance, the quietude punctuated when the listener least expects it by flashes of nimble-fingered fretwork. Flurries of jagged notes fly by your ears like jet-powered ninja stars and, when it’s all over (almost eight minutes later), you’re really not sure what you just heard…so cue it up again!

The shortest tune on the LP, “The Bird” is a jazzy treatise that displays Chadbourne’s musical dexterity and knowledge of the form. Sounding like the mutant love child of Charlie Christian and Al Di Meola, Eugene’s lightning-quick fretboard runs are accompanied by a secondary stream of lower, bassy notes that create an unusual (and fascinating) depth to the performance. “Be,” which closes out the album’s first side, is a chaotic roller-coaster ride of unusual sounds, aggressive syncopated rhythms, tortured guitar strings, and scary sound affects akin to what a UFO abduction probably sounds like. After politely applauding the previous song, the audience is shocked into silence by the randomness of Chadbourne’s performance here, its creative cacophony, and the obvious enthusiasm the guitarist brings to his craft.

Side two of Chadbourne’s Solo Guitar, Volume 4-1/3 is comprised of one long performance with the inventive (and on-the-nose) title of “Meo Tse Tung Did Not Have To Deal With People Who Were Watching Seven Hours of Television Every Day.” Eugene introduces the song with its title, a gong-like percussion opening the door of perception to all sorts of howling, growling string-play and a menacing croaking noise that sounds like a bullfrog on LSD. A torn-off riff on the bass strings builds a blueprint for a generation of stoner-metal bands to follow. The song creaks and moans under the weight of its own staggering construction, a truly brilliant composition built like a funhouse mirror – you’re never quite sure what your reflection is going to look like when it’s staring back at you.


Chadbourne, a true American underground icon, possesses an extensive knowledge of rock, blues, folk, and country music. But he is also an unusually-curious instrumentalist that has shown a willingness to push beyond any boundaries and into the unexpected in search of one or two shining cosmic notes. In this aspect, he’s a lot like fellow avant garde musical explorers like Sun Ra, James Blood Ulmer, and Captain Beefheart (without sounding like any of ‘em). Solo Guitar, Volume 4-1/3 is Muzak® for the hard of hearing, challenging and creative music with seemingly endless depths and boundless imagination. Deep into a storied career spent on the outer fringes of pop music, Eugene Chadbourne remains a visionary talent always looking for new ways to challenge himself and his audience. (Feeding Tube Records, released February 21, 2020)