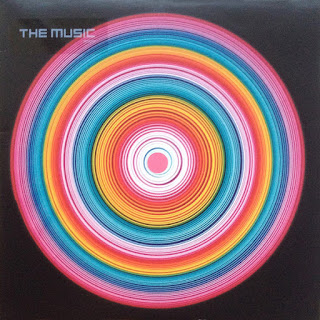 They’re one of the hot shit bands of the moment right now in England, burning even brighter than the Strokes or the White Stripes but hell, the wankers couldn’t even come up with a decent name. The Music, indeed – it’s surprising that they didn’t name the band’s debut “The Album” or something equally awe-inspiring. Slap this tasty lil’ sucker on yer box, however, and you’ll soon find out that there is nothing bland or generic about the Music.

The Music’s The Music


The band’s full-length debut opens with “The Dance,” a ramble-tamble trip down Alice’s rabbit hole into a lysergic fantasyland of swirling guitars, rapid-heartbeat rhythms, explosive drums, and turbocharged electronic noise. Vocalist Robert Harvey sounds like a cross between Geddy Lee, Dino Valenti, and Skip Spence; guitarist Adam Nutter is no novice at six-string noodling, tearing off razor-sharp leads while building massive waves of sound. Bassist Stuart Coleman and drummer Phil Jordan keep up a steady stream of cacophony, driving each song forward with the final force of a Mack truck.

The rest of The Music snaps and crackles in a similar manner as “The Dance,” the band’s mutant hybrid of British pop, ‘60s-styled psychedelica, and clashing electronic rhythms a refreshingly original brew concocted from familiar ingredients. It’s the tunes on The Music that define the band’s passion, however, crisp pairings of obtuse lyricism and instrumental miasma that mesmerize the listener. “Human” begins with an eerie guitar line that leads into haunting, echoed vocals and finishes out with crashing cymbals and ragged riffage.

“Float” pairs the space music/techno dance sound of the Orb with a taut guitar lead that slices to the bone, vocalist Harvey dancing around the lyrics like James Brown at the Apollo. “Turn Out the Light” plays all blueslike, Nutter picking out a Gary Moore lead (circa Skid Row) while Harvey spits out the “ba-ba-baby” style lyrics with a fire that Steve Tyler long ago forgot. Harvey hits the high notes like Robert Plant in his prime on “Disco,” his vocals matching the staccato instrumentation note for note while the band drives the (hellbound) train right off the freakin’ cliff into insanity.


Much of The Music hits yer ears like an inspired pairing of the Quicksilver Messenger Service and the Jesus and Mary Chain. The Music have created an exciting new sound that takes half a century of rock ‘n’ roll history and distills it into messy, noise-drenched and utterly fascinating three-and-a-half minute slices of chaos and charisma. How a major label came to release an album this daring and, gasp...shall we say “different”…in this day and age is beyond this humble scribe. If this is the future sound of rock ‘n’ roll, we could do a lot worse, ‘cause with the fire and passion these young Brits bring to the stage, the Music are going to be huge! The Reverend sez check out the Music, the band, and their delightfully rocking self-titled debut before everybody else gloms onto them. It’ll stay our little secret until then… (Capitol Records, released 2003)