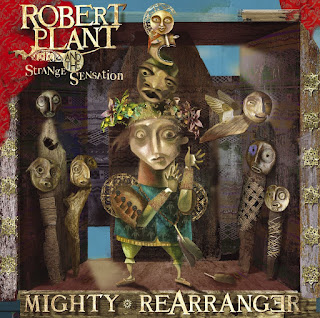 Simply put, Mighty Rearranger offers Robert Plant's best work since, perhaps, Led Zeppelin's Physical Graffiti. Invigorated by his skilled backing band, the Strange Sensation, Plant takes musical risks and climbs out on a limb more than once with the finest batch of songs he's delivered during a lengthy solo career that has lasted nearly a quarter-century. Picking up where he left off with 2002's acclaimed Dreamland LP, this is the Robert Plant of yore – dropping the hammer of the gods and belting out songs with a cocksure confidence that many lesser vocalists have tried to capture and failed, often times miserably.

Working in tandem with his excellent band, especially guitarists Justin Adams and Skin Tyson, with no little assistance from keyboardist John Baggot, Plant has crafted a solid collection of material. The songs on Mighty Rearranger revel in their hard rock roots, but also incorporate Plant's fascination with Eastern modality and poly-rhythms, elements of complex, Zep-styled British folk and the singer's love for classic American blues and soul music. If it sounds like a heady mix, well, it is, Plant and the Strange Sensation masterfully weaving in and out of genres, challenging one another and coming up with truly breathtaking performances.

Suffice it to say that the second coming of Robert Plant is no dull affair. Mighty Rearranger is filled with memorable moments that blister and peel. The Middle Eastern rhythms of "Another Tribe" are paired with weeping lead guitar and Plant's mournful vocals offer precise social commentary, asking hard questions. The singer attempts a bit of vocal gymnastics on "Freedom Fries," the syncopated rhythm track approximately a sort of rockabilly shuffle but matched swerve-for-swerve by Plant's assured phrasings. "Tin Pan Valley" takes a look at days gone by, Plant's subdued vocals supported by a sparse soundscape as he takes a few lyrical jabs at contemporaries trying to hold onto past glories. By the time the guitars roar into the mix and Plant's voice soars to Wagnerian heights, it's clear that the rock legend is moving forward, not back. "Dancing In Heaven" offers the sort of crystalline acoustic guitarwork that Zeppelin fans cut their eye teeth on, Plant's brilliant lyrical imagery matched by the band's instrumental virtuosity. The title cut is a bluesy, gospel-tinged rocker with raw fretwork and otherworldly keyboards.

Mighty Rearranger is not a reinvention of Robert Plant as such, but rather a showcase for the artist's creative evolution. Without ignoring his past triumphs, Plant has built a bridge to the future, finding a revival in fortunes by working with the second great band of his career. With Mighty Rearranger, Plant and the Strange Sensation have discovered the legendary fountain of youth, and its name is rock 'n' roll... (Sanctuary Records, released May 3, 2005)
Review originally published by Alt.Culture.Guide™, 2005
Buy the CD from Amazon.com: Robert Plant & the Strange Sensation's Mighty Rearranger
Posted by Rev. Keith A. Gordon at Friday, August 28, 2020