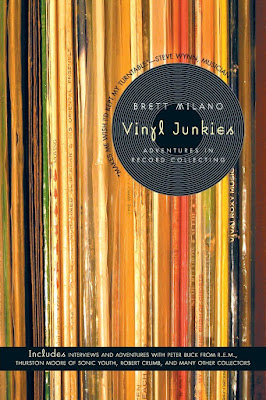 I'm pretty much a half-assed, unmotivated music collector. I love music and with a little over a thousand vinyl albums and close to three times that many CDs, my collection never fails to impress the squares, and it has a little of everything that I like to listen to during the average week. While I enjoy the odd bargain-bin album discovery and have been known to dig through hundreds of CDs just to find a handful of 99-cent discs to tote home, my feeble efforts pale in comparison with the freaks featured in Brett Milano's book Vinyl Junkies. While my collection (and the mild compulsions that led to its creation and ongoing evolution) astounds the average citizen, my personal obsessions bow down with awe in the face of collectors like John Tefteller, Jerry The DJ or 'Monoman' profiled by Milano.

With his novel High Fidelity and the film subsequently made from the book, writer and music lover Nick Hornby defined the different types of collector personality, from the elitist record geek to the seriously-disturbed completist who collects everything and anything, as long as he gets it all. Milano, on the other hand, attempts to unmask the collector's psyche, delving into the reasons behind the vinyl junkie's unrelenting obsession. Milano restricts his topic strictly to, well, vinyl, and to the reasons why the collector is driven to amass incredible archives of (typically) obscure and, in some cases, unbelievably bad music. Although some collectors will focus exclusively on format – 78 RPM shellac discs or 12" mono LPs, for instance – others are drawn entirely to style, such as the hunters of '50s-era doo-wop or gatherers of circa-60s psychedelica. Then there are those who concentrate on finding everything available by a single artist like, say, Olivia Newton-John (to use an example from the book). Perhaps the mildest form of stalking, every single import album version, alternative picture sleeve and rare fanzine interview is fair game for this class of collector.

In his attempt to get to the bottom of this collecting business, Milano speaks at length with several vinyl junkies of note. Peter Buck of R.E.M. and Thurston Moore of Sonic Youth share their collecting stories, as do Steve Turner of Mudhoney, underground cartoonist Robert Crumb and the J. Geils Band's Peter Wolf (notice how many collectors are musicians?). My friend, Ireland-born/England-raised Nashville record store owner Mike Smyth (himself a collector), once told me that the British are even more whacked out than we Americans, with collections often spanning several generations, never moving out of a single rent-controlled house or apartment. Milano has tracked down collectors across the pond like the Bevis Frond's Nick Salamon and his friend Stewart Lee for their valuable perspectives on music and collecting. The comments of label executives and music industry veterans, zine publishers and used record store owners add to the diverse group of collectors that Milano has talked with in putting together the book.

Throughout Vinyl Junkies, Milano adds his own voice, relating personal experiences as a collector and adding personality to what might otherwise be a rather boring subject for those not caught in the grip of record collecting. Although Vinyl Junkies is academic in scope and ambition, the book is lighthearted and enthusiastic in its treatment, a quick, entertaining and informative read. Although consumerist by its very nature, with collectors spending hundreds or thousands of dollars annually on music, the pursuit of record (and CD) collecting is a side of the industry that multi-national media companies would rather you ignore. Collecting usually steps beyond the confines of hype-driven corporate music choices, snubbing the marketing department in favor of personal empowerment. Finding that one disc that you've been searching for since you were a teenager tucked away in a box under a dusty shelf in a used record or thrift store is an adrenaline-pumping moment that satisfies in a way that a hundred image-driven Britney clones could never provide. Serious music collectors program their own personal playlist, creating a soundtrack for their lives that no record company could ever imagine. It's certainly a form of addiction, albeit a mild and mostly harmless diversion, but collecting and the music it brings into our lives provides a natural high.

There seem to be as many reasons for record collecting as there are record collectors, and Milano does an admirable job of sorting through the chaff, sidestepping enervating collector arguments (mono or stereo? vinyl or CD?) and providing insight into this growing musical subculture. It's a tribute to the writer that after my first reading of the book, I had to run out and buy several of the titles mentioned within, including albums by the Bevis Frond and H.P. Lovecraft. If you love music in the least little bit, you owe it to yourself to add Brett Milano's Vinyl Junkies to your collection. (St. Martin's Griffin, published November 10, 2003)
Review originally published by Alt.Culture.Guide™, 2004
Buy the book from Amazon.com: Brett Milano's Vinyl Junkies
Posted by Rev. Keith A. Gordon at Friday, August 28, 2020